North Korea’s dot-kp domain space could be back on the Internet soon. Domain name servers responsible for dot-kp have been offline for several months as have a handful of websites that used them.

With no servers the entire dot-kp address space, which only amounted to a handful of sites, has been out of operation. On Monday the Internet Assigned Numbers Authority (IANA), which coordinates the Internet’s top-level domains, updated the KP information to point to new servers.

Here’s more on the story, including some background about dot-kp’s mysterious disappearance:

The new servers aren’t yet online, but their numeric IP addresses are within the North Korean network being run by Star JV, the joint venture between Pyongyang and Thailand’s Loxley Pacific. 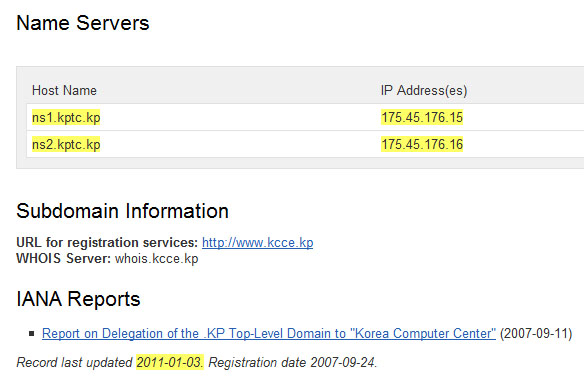 The kptc.kp domain names likely refer to the Korea Posts and Telecommunications Co.

The addresses for domain name registration, WHOIS (an Internet service that provides information on the ownership of a domain name) and some other data in the record still point to KCC Europe, the previous operator. It’s unknown if KCC Europe will continue to play a part in the operation of the dot-kp domain.

Naenara, one of the websites that previously used a dot-kp address, recently returned online from within the same network. It’s using an ungainly numeric address because the dot-kp service was offline, but it will presumably become accessible at “naenara.kp” once again when these DNS servers are up and running.

I have some more information on dot-kp domain names and I’ll post it soon.