The Twitter account of Uriminzokkiri, the China-based web site with close ties to Pyongyang, has apparently been compromised. (See the bottom of this post for updates.)

Four messages posted on Saturday morning are derogatory to leader Kim Jong-Il and Kim Jong-Un, his son and heir apparent.

Yonhap News translated one of the messages:

The messages are still visible at time of writing and are reproduced below.

The apparent hacking comes on Kim Jong-Un’s 28th birthday and will be an embarrassment to Uriminzokkiri. The messages will reach the 10,000 followers of the Twitter account, but they won’t be visible to ordinary North Koreans. Internet access is tightly controlled in the country. 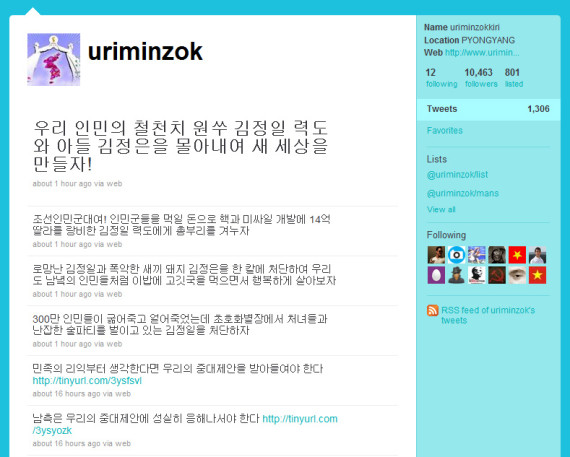 Update 1: As noted in the comments, the apparent hacking has also hit the YouTube channel. A video featuring Kim Jong-Un in a sportscar was posted to the account twice. Once without a title and again with the title “2011-01-08.” The video had gained almost 11,000 views at time of writing. The video is posted below.

The video shows a train laden with birthday gifts for the leader-in-waiting being derailed. Last month Open Radio, a Seoul-based shortwave broadcaster, reported that eight cars of the so-called birthday train were derailed.

“A cargo train that left Sinuiju for Pyongyang on Dec. 11 was derailed somewhere between Yomju Station and Tongnim Station,” a source within North Korea’s National Security Agency was quoted as saying by Open Radio for North Korea.

The main Uriminzokkiri website is currently offline, but the YouTube and Twitter postings remain. Organizations faced with such a problem would typically remove the social media postings first.

Update 2: The YouTube video was taken down on the weekend of Jan. 8 and Uriminzokkiri is still offline, but the Twitter postings remain at time of writing (Jan 10.)

NKEconWatch has posted a copy of the video on its channel.

On the same site a reader, Mary, offers the following translations of the four tweets: