The official Korea Central News Agency apparently altered at least one of the photos it sent from funeral procession of Kim Jong Il this week. The New York Times’ Lens Blog reported on the image, which was redistributed by several western photo agencies and then killed due to questions over its authenticity.

The photo was taken from the south east side of Kim Il Sung Square, perhaps the cabinet secretariat building or the observation deck on the eastern side of the square, and shows the procession of Kim Jong Il’s coffin through the city.

The alteration involves removing a group of people standing behind the crowd in the far left of the picture below. It might not have come to the attention of photo editors if Japan’s Kyodo News had not snapped and distributed a picture taken at almost the same time. 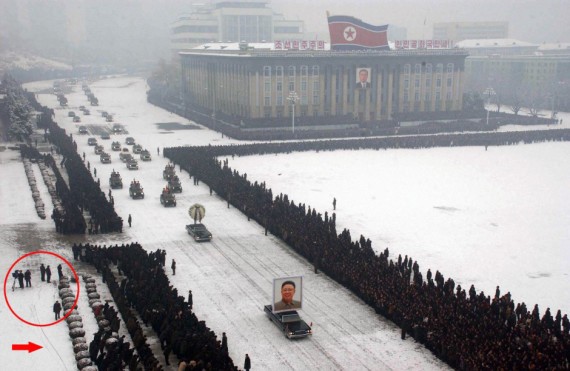 And here’s the KCNA photo: 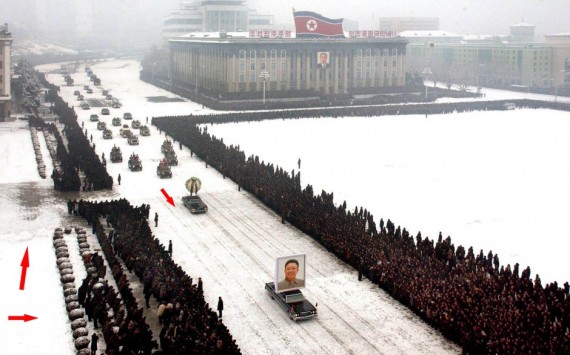 The alteration is seemingly minor and doesn’t detract from the main thrust of the photo but image alteration runs against most ethics guidelines of news organizations.

For example, the AP says: “we will not knowingly introduce false information into material intended for publication or broadcast; nor will we alter photo or image content.”

The two photos were taken at slightly different times. The position of the cars indicates the KCNA photo was taken after the Kyodo picture, but from TV coverage we know the cars were traveling at a brisk walking speed so the difference is probably only a couple of seconds. That means the people in the KCNA photo probably didn’t just walk out of frame.

In the comments under the Lens Blog posting some suggest the people may have been removed because they were looking in the wrong direction, away from the procession.

The camera crews turned away while the car that’s carrying Kim’s picture was passing by. Sadly, concentration camp is waiting for those poor camera men. — “Terrance K” NYT Lens Blog

Knowing the layout of Kim Il Sung Square on the day, the camera was pointing away from the cars because it was looking at the stand of VIPs seated to the left of the picture. So it might be unlikely the TV staffers faced any penalty. Numerous soldiers and security personnel were also stationed facing away from the procession.

It’s the second time this year that KCNA has been caught altering the content of an image.

It shouldn’t come as a surprise that a government-run news and propaganda agency from North Korea isn’t telling the whole truth — no one assumes KCNA’s text stories are 100 percent true — but photos present a unique problem because they are often distributed unedited by western news agencies.

After the differences between the two pictures were brought to the attention of photo editors, the image was killed by the European Pressphoto Agency (EPA), Agence France Presse and Reuters.

Another photo from the funeral is also causing a buzz in the blogosphere. Photos from KCNA and Kyodo News appear to show an extremely tall soldier standing in the crowd at the Kumsusan Memorial Palace.