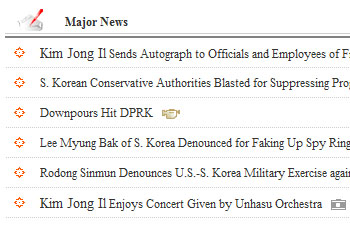 The launch of the service on December 1 comes less than a year after KCNA began distributing news in Japanese and makes 2011 a year of major expansion for KCNA.

KCNA’s output of flattering articles on North Korea’s leadership, political system and progress had been available for years in an, English and Spanish via a website in Tokyo. The Japanese site was run by a group affiliated with the General Association of Korean Residents in Japan (Chosen Soren).

Things started to change in late 2010 when the organization launched its own site from Pyongyang at kcna.kp (blocked in South Korea). In January it began offering video news and articles in Japanese. Its output of English-language news was approximately doubled in February.

KCNA said Chinese news is being launched to coincide with its anniversary:

It is occasioned by the 65th anniversary of KCNA. It will contribute to boosting traditional friendship between the DPRK and China and promoting the understanding of the DPRK by a great number of Chinese speaking population. — KCNA, November 29, 2011.

The site is due to launch later this week but you can see it being put together at this link.

App lets you keep up with KCNA on iPhone, iPad