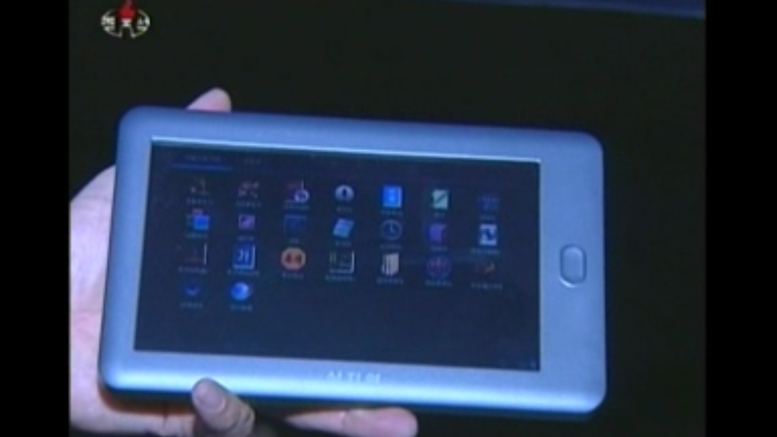 The trade fair, which happens in the spring and autumn each year, is a showcase for the latest products from North Korean companies and from international organizations looking to sell into the DPRK. This year it attracted some 270 companies including foreign participation from the Netherlands, Germany, Bulgaria, Switzerland, the UK, Austria, Italy, Finland, Poland, Australia, Malaysia, Mongolia, China and Taiwan, according to state-run KCNA.

The KCC tablet PC was detailed in an interview carried during the evening TV news bulletin with Park Se-Cheol, who was identified as an officer with the New Information Technology Trade Company of the KCC.

Park said the tablet was invented by the Korea Computer Center to enable people to study revolutionary ideas, to use science and technology, to carry out their business and to enjoy movies.

No details were provided about the operating system or technical specifications of the device.
While Park claimed it was developed by the Korea Computer Center, state media has made similar claims recently for laptop computers that were actually developed and manufactured by Chinese companies. The machines were supplied to North Korea for local customization.

In addition to the PC, the Korea Computer Center also showcased two systems that can be used with electronic door locks. The systems use facial recognition, fingerprint recognition and Bluetooth-enabled mobile phones.

Here are some more screenshots of the KCC display, taken from the state TV evening news bulletin.