Google’s on a bit of a North Korean kick at the moment. Just weeks after its chairman, Eric Schmidt, made a high-profile visit to Pyongyang, the company has added additional detail about the county to Google Maps.

Roads, subway stations, parks and some major monuments and buildings are on the new map, which became available on Monday.

Google typically buys such information from local providers but in countries like North Korea where commercial digital maps are not available, it relies on citizen submissions made through Google Map Maker. That’s exactly how the company compiled this first version of its map.

Look at the difference it’s made to Google Maps, which was sparsely populated with information about North Korea in the past:

As much as volunteer map makers have added, there remains a massive amount of data missing. That’s something Google readily acknowledges:

We know this map is not perfect — one of the exciting things about maps is that the world is a constantly changing place. We encourage people from around the world to continue helping us improve the quality of these maps for everyone with Google Map Maker. From this point forward, any further approved updates to the North Korean maps in Google Map Maker will also appear on Google Maps. — Google Lat Long Blog, January 28, 2013.

For example, here’s a look at Kim Il Sung Square: 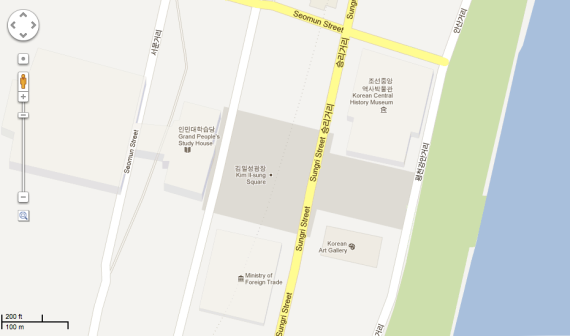 But while fairly well known buildings in the very heart of Pyongyang are still missing, some of the parts of North Korea the country would rather keep secret have made the map.

Here’s the Yodok concentration camp in the center of the country: 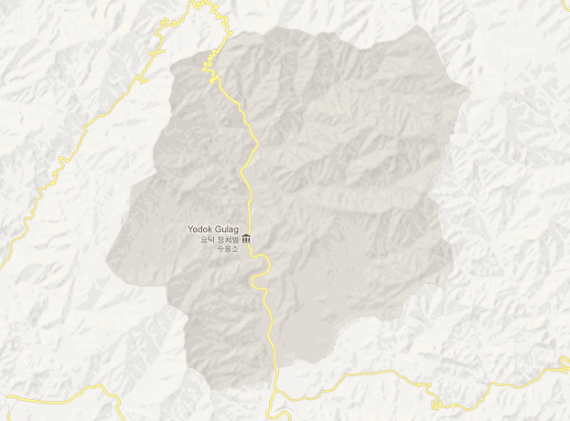 And while we’re looking at what’s present and what’s missing, here’s an ironic little find. Thanks to South Korea’s national security laws, Google has more detailed information about the northern side of the border region than it does the southern side.

The citizen controlled zone near the border is nothing but a blank space in Google Maps, and because Google has an office in Seoul it can’t fill it in for fear of breaking South Korean law. Google doesn’t have to worry about any such North Korean laws, so the city of Kaesong and the industrial zone (on the left of the map below) appears in more detail than the southern border region, which is just a collection of town names. 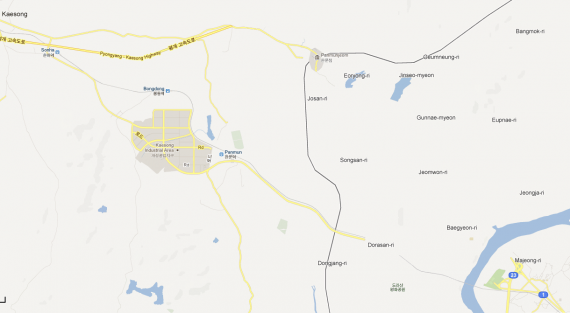 Google notes that anyone can add information about North Korea to its map. It’s one of roughly 200 regions where Google is asking users to submit data to increase the data and accuracy of its maps.

Creating maps is a crucial first step towards helping people access more information about parts of the world that are unfamiliar to them. While many people around the globe are fascinated with North Korea, these maps are especially important for the citizens of South Korea who have ancestral connections or still have family living there.  — Google Lat Long Blog, January 28, 2013.

Although an important note is that Google isn’t quite right when it says, “As a result, the world can access maps of North Korea that offer much more information and detail than before.”

There’s also the DPRK Digital Atlas, jointly published by Curtis and 38 North, the blog of the U.S.-Korea Institute at the School of Advanced International Studies (SAIS), Johns Hopkins University.