Another Uriminzokkiri video has been removed from YouTube for copyright infringement. This time it’s a propaganda video that borrowed its soundtrack from the video game “The Elder Scrolls IV: Oblivion.”

The takedown, confirmed by a message when users attempt to access the clip, comes just two weeks after a previous propaganda video was removed after a copyright complaint by Activision. That video used a computer-generated animation clip from Activision’s “Call of Duty: Modern Warfare 3.”

The latest removal comes after a copyright complaint from ZeniMax Media, a Maryland-based computer game publisher that puts out the game under its Bethesda Software division.

Uriminzokkiri regularly uses footage from foreign media in its productions. It usually goes largely unnoticed, but the Activision takedown a couple of weeks — likely as a result of coverage of the clip in the U.S. video gaming media — has meant extra eyes are now watching its output. As NKNews notes, some clips were taken from foreign TV coverage.

The Uriminzokkiri operation, which is based in China, needs to watch out that it doesn’t fall foul of YouTube’s copyright system otherwise it could lose the channel. 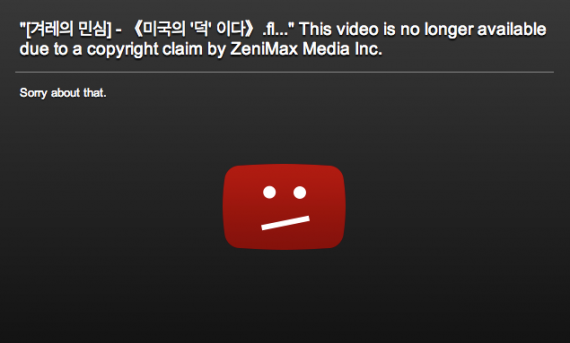