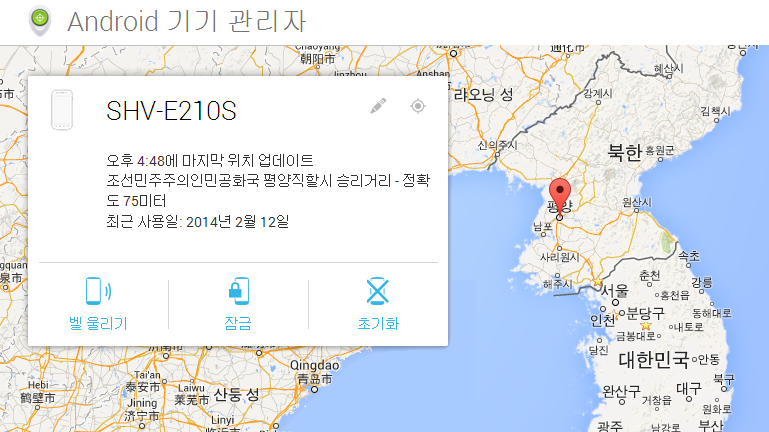 An image, apparently from Google's Android locator, shows a lost phone in Pyongyang

A smartphone that was lost in South Korea has apparently surfaced in Pyongyang.

A South Korean Internet used posted a screenshot from Google’s Android Device Manager that shows the phone on Sungri Street (????) in Pyongyang. The page says the location accuracy is 75 meters.

Curtis Melvin, author of North Korea Economy Watch and authority on places in the DPRK, told me Sungri Street runs through the central district in Pyongyang. It’s marked on Google Maps and is the road that dissects Kim Il Sung Square. 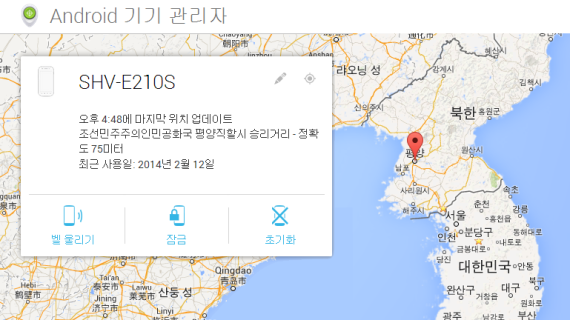 An image, apparently from Google’s Android locator, shows a lost phone in Pyongyang

It hasn’t been possible to verify the story, but the SHV-E210S is the model name of a Samsung Galaxy S III variant that is sold in South Korea.

What’s perhaps most interesting is that the Android Device Manager can find the handset because a typical North Korean cell phone or WiFi connection doesn’t have Internet access.

Or the whole thing could be fake.