DVDs being smuggled into the DPRK have gained the country a point in an annual ranking of press freedom. [Updated, see below]

The ranking, by Washington, D.C., -based Freedom House was published on Wednesday and this year gave North Korea a score of 96. That still leaves it at the absolute bottom of the survey, this year tied with Turkmenistan, but its a point higher than last year.

The extra point came, “as a result of increased attempts to circumvent stringent censorship and the use of technologies such as smuggled DVDs to spread news and information,” Freedom House said in the report.

Recent years have seen a rise in the entry into the DPRK of smuggled DVDs and USB sticks containing movies and South Korean TV programs. The contraband comes across the country’s northern border with China and is said to be increasingly popular and influential in North Korea.

The government conducts occasional crackdowns to catch people watching the DVDs. According to information from the country, this sometimes this involves switching power off to entire neighborhoods so discs get stuck in DVD players, then going door-to-door to check the players. For this reason and because they are smaller, USB sticks are becoming more popular so authorities are sometimes disabling the USB ports on DVD players, the reports say.

Apart from the DVDs and USB sticks, the only other media that makes it into the country on a regular basis is foreign radio broadcasts. A handful of radio stations broadcasts programs each night in Korean to North Korea and are the only daily media available to the country outside of the highly controlled state media system. However, reception of foreign radio is illegal and can also get citizens into trouble.

North Korea’s point total in the survey has been up and down a little over the last decade but hasn’t really changed much. 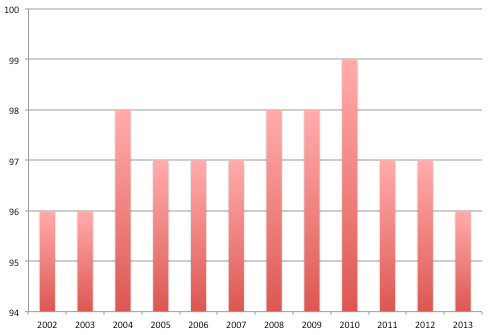 It’s worst year came in 2010 when it scored 99 — a reaction to the June 2009 arrest and sentencing of American journalists Laura Ling and Euna Lee. They were later released.

A year later, the country scored two points better thanks to the admittance of a handful of foreign reporters to report on the 65th anniversary of the Korea Workers’ Party and the first public appearance of Kim Jong Un. The same year, the country also got its first full connection to the Internet.

The Freedom House survey is one of two main surveys carried out each year that looks at press freedom. The other, by Reporters Without Borders, came out in January and ranked North Korea second-last. Eritrea was bottom in that survey, it scored 94 in the Freedom House survey and was judged the fourth worst country in the world for freedom of media.

“North Korea is still ranked among the worst of the worst, but what we did see is a slight improvement,” said Karin Karlekar, director of the Freedom of the Press report project at Freedom House, in an interview with North Korea Tech. “It’s largely from increased information flowing into the country than anything the government has done.”

In addition to the DVDs and USB sticks, Karlekar also cited the greater impact of foreign radio broadcasts as being partially responsible for the additional point awarded to the DPRK this year.

“It’s a small change in a very, very restricted environment,” she said.

“We saw a slight improvement in some of the government influence over state-controlled media,” said Karlekar. She cited pressure on media outlets and Internet censorship, particularly of North Korean-related content, as among the main concerns with South Korea.