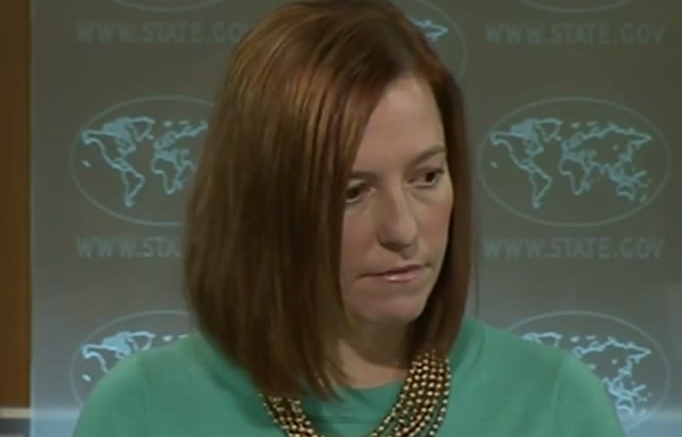 The questions were a little more detailed, as you’d expect from reporters who understand the ins and outs of U.S. foreign relations so well. They centered around the option of putting North Korea back on the list of state sponsors of terror and what effect that might have. And they also came back to the issue of whether State Dept. officials saw the movie before and signed off on the scenes.

The reporters reference a letter sent by Senator Robert Menendez, Chairman of the Senate Foreign Relations Committee, to Secretary of State John Kerry urging him to consider re-designating North Korea as a state sponsor of terrorism. The letter can be found here.

The State Dept. spokeswoman, Jen Psaki, said she had no immediate response. Asked if Secretary Kerry agrees with President Obama’s view that Sony was wrong to pull the movie, she said:

“He does. Certainly, he believes that freedom of speech and expression is something that we should support broadly, and certainly, he agrees with the President’s assessment.”

“Well, I think the way we view it is that the United States Government will continue to make every effort to set the example that we’re not going to be in the crouch or the fear position when it comes to threats from North Korea.  We believe that freedom of speech and expression should be uphold across the board.  Obviously, individual companies make their own decisions, but we believe that those values should be respected and we’ll continue to set that precedent.”