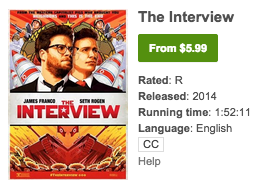 What a difference a week makes. The Christmas Day release of “The Interview” is back on and Sony has already begun offering the movie online.

The movie, a comedy in which two TV reporters embark on a secret mission to kill Kim Jong Un, appeared on YouTube and Google Play on December 23 at 1pm ET. It costs $5.99 to rent for 48 hours and $15 to own. 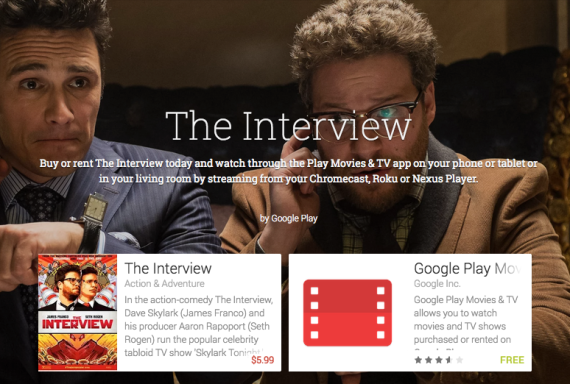 Google said that it was first approached by Sony on December 17, on the same day that is announced it would be canceling the December 25 release.

“Last Wednesday Sony began contacting a number of companies, including Google, to ask if we’d be able to make their movie, ‘The Interview,’ available online. We’d had a similar thought and were eager to help — though given everything that’s happened, the security implications were very much at the front of our minds.,” said David Drummond, Google’s chief lawyer in a statement.

“Of course it was tempting to hope that something else would happen to ensure this movie saw the light of day. But after discussing all the issues, Sony and Google agreed that we could not sit on the sidelines and allow a handful of people to determine the limits of free speech in another country (however silly the content might be).”

Voice of Korea on the Sony hack