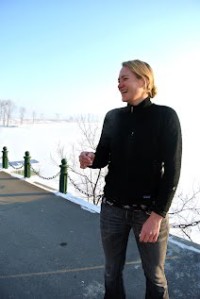 Sophie Schmidt in Pyongyang, in an image from her blog

Sophie Schmidt, the daughter of Google Chairman Eric Schmidt, has written a comprehensive blog post about her recent trip to Pyongyang and included in her revelations: North Korean officials seemed to acknowledge they can’t keep the Internet out.

The posting is perhaps the most complete account yet of the visit by any member of the group, which went around Pyongyang largely unobserved except by local Associated Press reporters.

In the post, entitled “Sophie in North Korea,” Sophie Schmidt writes about the impressions she got of the city, country and sights she saw on the visit.

They’re similar to the feelings that most first-time visitors to North Korea feel: namely, a sense of amazement and astonishment at the sights and that nagging feeling that you’re never really sure if the things you’re seeing are completely authentic.

It turns out that the team didn’t bother to pack any cell phones or laptop computers for the trip. Schimdt writes they left them behind in Beijing, “since we were warned they’d be confiscated in NK, and probably infected with lord knows what malware.”

I wonder when any of the technologists on the trip last spent four days without a cell phone or computer? There aren’t many trips or places in the world that demand such measures these days.

Speaking as a tech person, just getting to speak to officials in the most closed country on earth about the virtues of the Internet–and having them (appear to) listen–seemed extraordinary. — Sophie In Korea, Google Sites, January 2013.

Among the other security advice the team received: assume you’re being watched and monitored all the time.

We were told well ahead of time to assume that everything was bugged: phones, cars, rooms, meetings, restaurants and who knows what else.  I looked for cameras in the room but came up short. But then, why bother with cameras when you have minders?

They stayed at a guesthouse a few miles outside of Pyongyang and had three TV channels in their rooms: CNN International, a channel of dubbed Russian movies, and Korean Central Television. Schmidt writes that her father reacted to the potential for bugs by simply leaving his door open.

The most interesting part for me, and likely readers of this blog, is the section on technology.

Schmidt writes about her visit to the e-library at Kim Il Sung University with a couple of interesting observations:

One problem: No one was actually doing anything.  A few scrolled or clicked, but the rest just stared. More disturbing: when our group walked in–a noisy bunch, with media in tow–not one of them looked up from their desks.  Not a head turn, no eye contact, no reaction to stimuli. They might as well have been figurines.

But perhaps the most interesting part of the post from a technology point-of-view is right at the end, when Schmidt talks about the Internet and the North Korean tablet computer she was shown. We’ve written about the tablet computer and other North Korean gadgets before, and the likelihood that they are OEM products from China that are localized in North Korea.

Some of the techies asked Eric Schmidt some “savvy” questions, Sophie Schmidt wrote:

Eric fielded questions like, “When is the next version of Android coming out?”and “Can you help us with e-Settlement so that we can put North Korean apps on Android Market?”  Answers: soon, and No, silly North Koreans, you’re under international bank sanctions.

Getting North Korean apps on Android Market? That’s an interesting ambition, but not completely unprecedented. There are a handful of North Korean-developed cell phone games already available, although not directly from the DPRK. Nosotek, a joint-venture software outsourcing company developed the games like Bobbies Blocks, which are available through a German software house.

When the group arrived in Beijing, Eric Schmidt told reporters that he’d told the North Koreans they needed to

“Once the internet starts, citizens in a country can certainly build on top of it, but the government has to do something,” Schmidt told reporters at Beijing airport. “They have to make it possible for people to use the internet, which the government in North Korea has not yet done. It’s their choice now, and in my view it’s time now for them to start or they will remain behind.” — The Guardian, January 10, 2013.

He didn’t say how they’d taken that advice, but Sophie Schmidt offers her interpretation of the response:

They seemed to acknowledge that connectivity is coming, and that they can’t hope to keep it out.  Indeed, some seemed to understand that it’s only with connectivity that their country has a snowball’s chance in hell of keeping up with the 21st century. But we’ll have to wait and see what direction they choose to take.

Take a look at the page and read the whole thing. There’s also a rather nice Picasa web album full of photos from the trip.