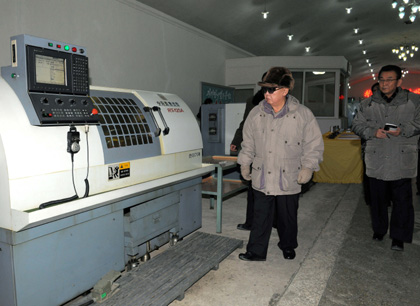 Alongside a call to reduced tensions with its southern neighbor, North Korea’s New Year joint editorial called for a significant effort to modernize and build up its light-industry sector this year. Central to this task will be the adoption of computer-controlled machinery, so-called CNC (computer numeric control) equipment.

So it comes as no surprise that factories and CNC technology featured big Kim Jong Il’s on-site guidance tours in January. His first visit of the year was to the Nampho Glass Bottle Factory, reported KCNA.

“He praised the workers of the factory and builders and their helpers for their feats performed in building such factory requiring cutting-edge technology by their own efforts with home-made equipment and indigenous technology,” KCNA, January 12, 2011.

CNC isn’t new in most countries, but it’s only in the last few years that enthusiastic reports about its adoption and appearance on North Korean factory floors have appeared.

“General Secretary Kim Jong Il provided field guidance to the Taegwan Glass factory which has been successfully put on a CNC basis.”

“Watching CNC-based machines and a variety of products, he was greatly satisfied to learn that the workers of the factory made leaping progress in the production of glass products by successfully putting the production processes on a modern and scientific basis. He highly appreciated their feats,” KCNA, January 15, 2011.

Here’s a list of Kim Jong Il’s trips from January, as reported in official media. The emphasis in January has been on light industry and factories producing food and goods for daily life. I’ve marked those at which state media coverage noted CNC machinery.

The dates are those on which the visit was reported by state media. IT’s worth noting that with the call for reduced tensions that also appeared in the editorial, no military-related visits were reported.

Curtis has a good explainer on CNC and its introduction in North Korea on NKEconWatch.

How the world reported Kim’s death, and how North Korea reported that