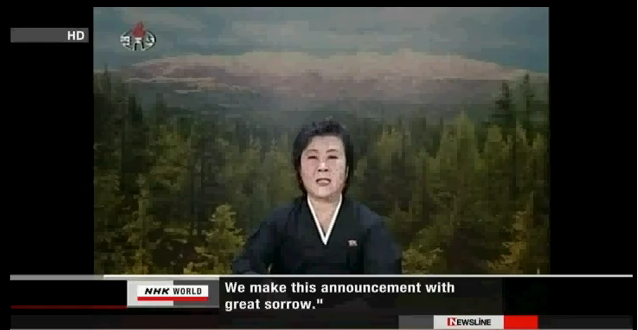 The news of Kim Jong Il’s death has all eyes focused on the Asian nation. Unlike many other countries, there’s only a handful of official news outlets and getting direct access can be difficult.

North Korean TV (KCTV) can be watched live through the Thaicom 5 satellite throughout Asia, the Middle East, Africa and some parts of Europe but you’ll need a satellite dish at least 3 meters across. If you have such a dish point it at:

North Korean radio (KCBS) is easier to catch. In neighboring countries it can be heard on a normal mediumwave (AM) radio but usually not until nighttime when long-distance reception improves. Try 720, 819, 873, 882, 999 and 1080kHz. It can be difficult to catch in South Korea due to jamming.

There are also several shortwave frequencies: 2850 has good coverage of South Korea all day and neighboring countries at night. Other strong frequencies to try are 6100, 9665 and 11,680kHz. Some of these can be heard worldwide at certain times of day.

Listeners in neighboring countries can also try Pyongyang Broadcasting Station (PBS), a Korean-language network aimed overseas. It broadcasts at various times of day on 621, 684, 657 and 801kHz mediumwave (AM) and 6250 and 6400kHz shortwave. PBS puts in a strong signal to Japan in the evening on 657 and 2850.

International broadcasts in multiple languages can also be heard on Voice of Korea. The full English language schedule is on this page.

Both KCBS and Voice of Korea are also carried as radio stations alongside KCTV on Thaicom 5.