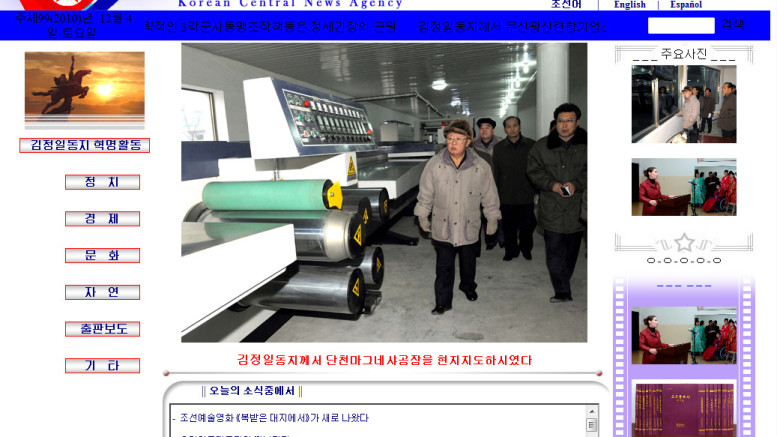 The Korean Central News Agency has significantly increased its online output in the last few months as it continues to expand its new website.

The website, available at kcna.kp (except in South Korea where it’s blocked), first appeared in October 2010 and is KCNA’s first official home on the web. KCNA news was previously available via Korea News Service in Tokyo, but the new site appears to be run directly from Pyongyang.

When it launched, it carried KCNA’s English and Spanish language output and some photos. A refresh of the site in December added Korean, but this simply brought it level with the material available on the Japanese site.

The real expansion began in January, when KCNA began offering online video from Pyongyang and news in Japanese. That was followed in February by a big expansion in English-language output.

The graph below shows the number of English-language articles issued by KCNA during February 2010 and the same month in 2011. For the first half of the month the daily story count is roughly the same, or in some cases 2010 is ahead, but in the middle of the month the story count for 2011 surges. 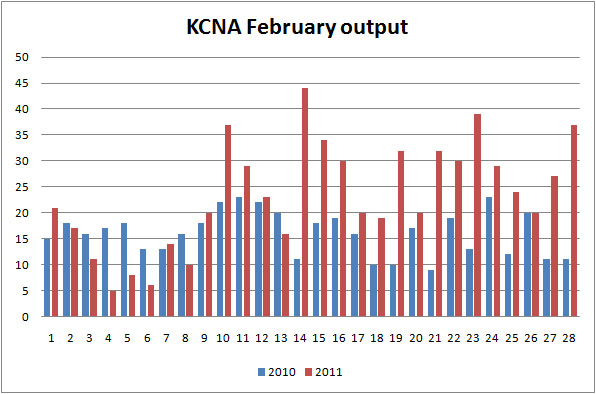 (The figures were calculated through simple addition of the daily articles posted on the kcna.co.jp website)

There were only four days during February 2010 when KCNA published more than 20 articles. In February 2011 it surpassed that mark on more than half of the days in the month.

A closer look at the articles issued reveals this is more than just a busy news period.

KCNA has traditionally written about DPRK affairs and international relations, but from mid-February appears to have expanded into news coverage that has no specific link with North Korea. The stories mostly concern countries with which the DPRK has ties – either friendly or hostile. Here’s an example from February 28:

Pyongyang, February 28 (KCNA) — Unemployment is still way too high all across the country, U.S. President Barack Obama said on Thursday.
The stubbornly high unemployment is the biggest challenge facing the nation currently, he said while meeting with members of the newly- established President?s Council on Jobs and Competitiveness. – KCNA, Feb. 28, 2011

When KCNA first launched its new website, a lot of people were wondering if this represented a new online propaganda push. The new focus on world affairs, and especially the negative news slant against some countries, might add weight to that theory.