North Korea’s international broadcasting service, The Voice of Korea, will launch a website on Friday, according to a domestic radio report transcribed by BBC Monitoring. (The site has launched a day early. See below for update.)

The site is due to open on Friday, which is Kim Il Sung’s birthday, and will be available at http://www.vok.rep.kp .

The report didn’t detail what the website would carry, but judging from comments and emails I receive concerning the frequency schedule, daily recordings of the station’s programming would be appreciated by its listeners. The shortwave signal is sometimes difficult to hear.

Voice of Korea broadcasts in Arabic, Chinese, English, French, German, Japanese, Russian and Spanish. It also relays programs from the Pyongyang Broadcasting Station, which is aimed at Koreans in nearby countries, and the domestic Korea Central Broadcasting Station.

The upcoming launch of the site could explain the current absence of many North Korean websites. They’ve been dropping off the Internet this week, and that could mean engineers are reorganizing servers in preparation for the launch.

(Thanks to reader Tobias Dondelinger for pointing me to the report on Radio Netherlands’ Media Network.)

Update 1: The site appeared on Thursday afternoon, although doesn’t appear to be quite ready yet. It has audio news files posted as AAC audio clips, but I had trouble getting any to play. I suspect they are still uploading content to the server.

Users can download the same HMS Player that is in use on the KCNA site. If you’d rather not do that, I’ll post a work-around as soon as I confirm it.

All nine language services have a page. The English service page includes news, songs, and programs. 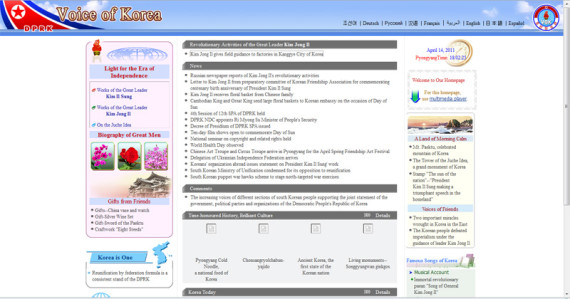 Voice of Korea schedule through spring 2017