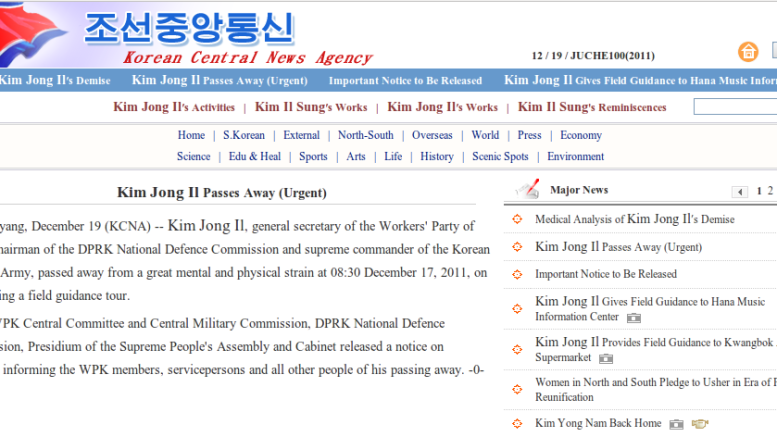 A familiar newscaster dressed in black appears on screen and makes a tearful announcement: Kim Jong Il is dead. When North Korean state TV and radio broke the news at noon on Monday they had already given advance notice that a major announcement was coming. Its delivery was an attempt to set a national mood of mourning.

On the Internet things were a bit different with the news being carried as if it was any other story.

North Korea’s state media ventured online last year when a new Internet connection was brought to Pyongyang. The state-run news agency, the major national daily and the international radio outlet all have websites and steadily churn out daily propaganda about economic growth, scientific breakthroughs and the trips of Kim Jong Il across the country.

The audience is purely international — almost no one in North Korea has Internet access — and the subject matter not one that lends itself to breaking news. So perhaps it’s not surprising that North Korea’s media didn’t immediately replace their sites with somber pictures, banner headlines, or breaking news tag.

First word came shortly after midday — after the news had broke on TV and radio — with bulletins on the KCNA website.

KCNA’s Korean front page was pretty much the same. North Korea’s other websites, the national Rodong Sinmum daily and Voice of Korea international radio service, didn’t bother to immediately update their websites. Uriminzokkiri, a China-based site with close links to Pyongyang, was also slow out the gate in getting the news up.

But don’t read too much into this. The death of Kim Jong Il is a huge event for the country and the state propaganda machine. The lack of national mourning on the websites is likely much more to do with an inability to turn around a slick website redesign in hours that anything else.

A little over an hour after the announcement, KCNA had added a picture to its front page: 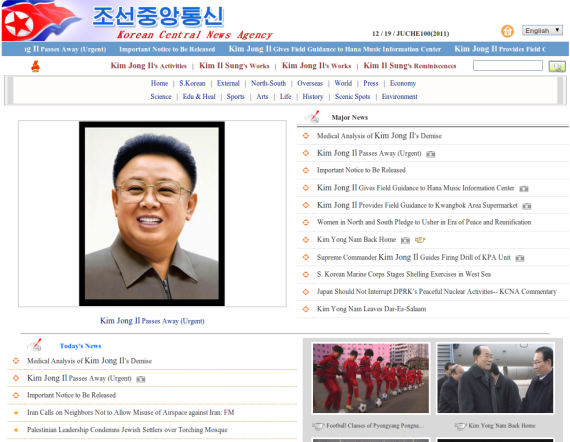