Are things starting to get tough for Koryolink?

Subscriptions are at a record 535,133 and quarterly revenue has never been higher at US.8 million, but look a little closer and you’ll see the company is having to push harder to get new customers and existing customers are spending less.

Quarterly growth was 103,214 subscriptions, the third highest yet recorded since service began in the final weeks of 2008. That growth made the January to March quarter the first since mid 2009 where quarter-on-quarter growth failed to beat the period before.

Take a look at the graph below showing the number of new subscribers each quarter. You’ll see a drop in the middle of 2009 but then constant growth until the first three months of this year. 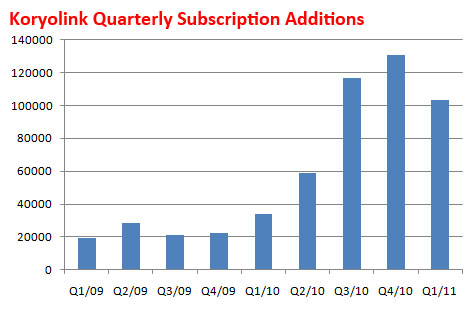 There have been some reports that Koryolink is hoping to half a million subscribers by the end of 2011. To get there it needs to add an additional 465,000 subscribers, which averaged out is 155,000 subscribers per quarter. That’s certainly not impossible, but it will require a major push.

The revenue Koryolink takes from each subscriber is also falling. This is perhaps inevitable as the service expands its reach from the ultra wealthy to the wealthy and middle class, but it’s a worry for the company.

This graph shows the average revenue per user per month. The figures are averaged for each quarter. Growing ARPU, or at least keeping it steady, is a prime goal of mobile operators. 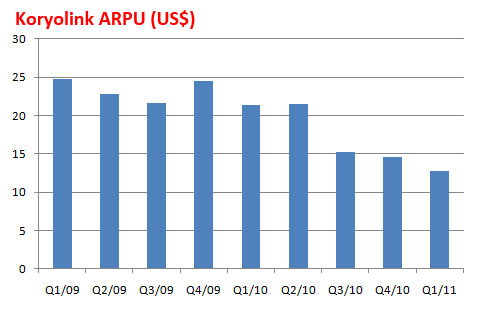 The amount of time each customer is on the phone, the minutes of usage (below), is also falling but the decline isn’t as steep as the average revenue per month. That indicates call charges are getting cheaper. 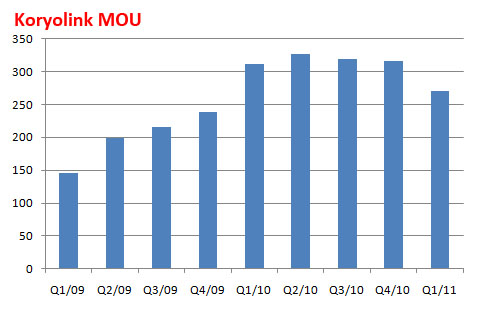 In January 2011, and for the first time in the DPRK, Koryolink offered the Multimedia Messaging Service (MMS) to its subscribers. This represented the latest addition to Koryolink?s value-added services portfolio. The service was received positively from subscribers and continues to exhibit a healthy growth rate to date.

A month later, the company launched a push to increase its foreign currency earnings.

In February 2011, Koryolink introduced an innovative offering targeting all Korean customers called the “Euro Packs”. The “Euro Packs” are basically recharge cards that subscribers can buy in Euros and in return, such scratch cards offer them free voice and value-added services in the offpeak period. The main objective behind launching such an offering was to boost Koryolink?s Euro revenue. The “Euro Packs” sales trend has seen a steady increase since launch which proves the right compatibility and wide acceptance of the offering in the Korean market.

The 3G network currently covers Pyongyang, 14 major cities and 72 smaller cities. That’s equivalent to 14 percent of North Korea, but thanks to a concentration of people in towns and cities it reaches around 92 percent of the population.

There are now 18 Koryolink service centers in Pyongyang and a shop each in eight additional cities.

You can download the full Orascom quarterly report (PDF) here.