The Korea Central News Agency, Voice of Korea and Rodong Sinmun started using a heavier or larger font when spelling out his name.

Here’s how it looked on the KCNA website on Saturday. If you look closely you’ll see Kim Jong Un’s name appears slightly larger. 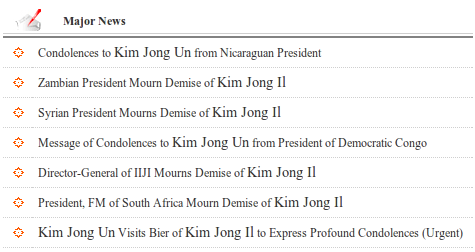 Not only had KCNA started using the additional coding, it had gone back through its database of stories and adjusted each instance of Kim Jong Un’s name.

And here are the Voice of Korea:

Naenara, a portal operated by the Korea Computer Center, isn’t updated as frequently and still had Kim Jong Un’s name in the conventional font.

Back in July I explained how North Korean websites use a code in the page’s hypertext markup language (HTML) to name the names appear larger and more prominent. That had not been used for Kim Jong Un until Saturday.

The move coincided with the introduction of the title “supreme commander” for Kim Jong Un and a large commentary in the Rodong Sinmun.

“We will complete the great task of our songun revolution by upholding Comrade Kim Jong-un as our supreme commander, our general,” — Rodong Sinmun, Dec. 24, 2011.

The commentary was widely viewed as an indication that Kim Jong Un’s succession to become leader of North Korea is on track.

“The state-run media’s call for Kim Jong-un to lead the military suggests that, at least for now, he is on pace to take full control of the country,” — New York Times, Dec. 24, 2011.

Voice of Korea schedule through spring 2017