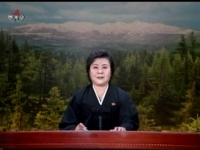 North Korea’s state television is playing a leading role in attempting to set a national mood of solemnity as the country moves through its mourning period. The media, especially TV, has always played an important part in the government’s propaganda efforts so what’s on North Korean screens these days?

It’s no surprise that news of his death and of the mourning that has followed has filled extra news bulletins.

Around the news softer TV shows, such as those for children and wildlife or science documentaries, have been canceled in favor of documentaries about Kim, his life, his father and patriotic military topics, according to monitoring reports.

Monday evening saw a special on his recent on-the-spot-guidance visits to places in South Hamgyong province, said BBC Monitoring. Such visits were a staple of media coverage of Kim and photos from them spawned the cult blog “Kim Jong Il Looking at things.” His death was reported to have happened on a train while traveling for just such visits (although South Korea’s National Intelligence Service has put the claim in doubt.)

Viewers were also offered documentaries with titles such as: “Military-First Sun That Shines in the World,” “Great Leadership for Breakthrough of Our Style” and Unrolling a Socialist Paradise in the Military-First Era.” Also broadcast was part 250 of the memoirs of Kim Il Sung.

Are people watching this? It’s difficult to tell, but North Korean radio isn’t offering much of an alternative.

In between news bulletins and clips of people expressing their sorrow over the death are programs such as: “Our General Lives Eternally in the Heart of the People,” “Let Immortal Accomplishments in the Military-First Cause Be Inherited Forever,” and the impressively-titled “Let Us More Resolutely Fight To Overcome Today’s Difficult Situation and Achieve a Final Victory in the Juche Revolutionary Cause by Turning Sadness Into Strength and Courage Under the Leadership of the Great Comrade Kim Jong-un.”

One of the interesting things picked up on in the BBC Monitoring reports is the voices being used to provide guidance on mourning. The media isn’t interviewing senior government or party officials but those lower down the hierarchy.

Radio interviews have included manager at Kaesong Youth Park, the principal of Nampo Middle School No1, and a manager at Pyongyang Textile Plant.

Between all the talking both TV and radio networks continue to play patriotic music. But that’s always been a staple of the North Korean media.

If you want to listen for yourself, check out my guide to listening to domestic North Korean radio (it’s possible worldwide if you have a good radio and antenna) or the schedule for Voice of Korea English broadcasts (a stronger signal in many regions of the world.)

What’s missing so far? Hours of reports and documentaries about Kim Jong Un. His visit to pay respects to his father was widely covered, first with still images and then video, but the national media hasn’t spent a lot of time talking about him. That’s perhaps no surprise at such an early stage.

Analysts will be watching closely once Kim’s funeral is over to see how quickly Kim Jong Un becomes a regular part of the media output and how much time and space he is given.

Kim Jong Il’s death – headlines from across the web