A website in Japan has begun offering an archive of several days worth of North Korean TV news broadcasts.

The Pyongyang News website appears to be affiliated with a handful of sites operated by the General Association of Korean Residents in Japan (sometimes known as ‘Chosen Soren’ or ‘Chongryon’) (??????????, ??? ??? ????).

At time of writing, news bulletins going back to March 2nd are available. That’s longer than the 10 day archive offered by Elufa.net, another Tokyo-based website affiliated with the same group. The programs are received via a feed of North Korean television on the Thaicom satellite.

The new site has bulletins available as mp4 files that will play in most web browsers and as Windows Media format files for other applications.

It adds to an increasing number of websites through which Korea Central TV’s main evening news is available.

For many years the only source was Elufa.net, but in the last few years the news has also become available via the Seoul-based SPTV site and through several YouTube channels (Uriminzokkiri, Rodrigorojo1, Stimmekoreas).

The main evening news airs at 8pm local time each night on KCTV nationwide and through its satellite feed. The Thaicom feed is available through a large dish to viewers in much of Asia, the Middle East and Africa. There are no official feeds for viewers in Europe or the Americas.

Update: The site appeared to go offline several hours after our report. Keep checking the link for current status. 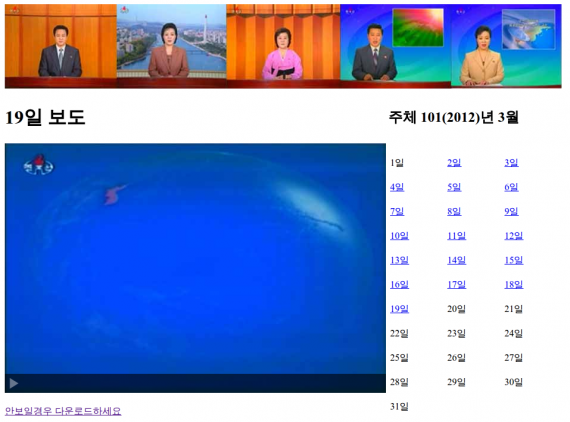