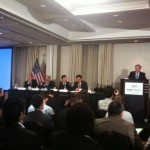 Cracks in the information wall that has long surrounded North Korea are increasingly allowing citizens in the country more exposure to foreign media, according to a report published on Thursday.

The report, produced by Intermedia for the U.S. Department of State, was based on surveys of several hundred defectors, refugees and travelers, and found “substantial numbers” are able to access outside media.

It’s based on a relatively small sample of a few hundred people made up of those who have already made it outside the country, either by defecting or crossing the Chinese border for trade. Therefore, the results can’t simply be extrapolated to the entire nation, but the report provides some fascinating insight into life in North Korea today.

The most prevalent form of foreign media is DVDs, smuggled into the country from China and usually containing South Korean dramas.

Almost half of 250 of North Korean refugees and travelers interviewed in a 2010 survey reported having watched foreign DVDs. That was significantly more than the 27 percent who said they had listened to foreign radio and 24 percent who reported watching foreign TV.

The broader audience for DVDs and a willingness to share viewing with trusted friends is getting foreign content to people that don’t fit the typical profile of a foreign radio listener. It’s through DVDs that many North Koreans get their first glimpse of the world in general and South Korea in particular, the report said.

The majority of listening is done late at night, with the 10pm to 1am timeframe attracting most listeners. That’s reflected in the broadcasting schedules of international stations, which schedule most programs on air during the late evening hours.

Listening to foreign radio presents some challenges, from getting a radio with an adjustable tuner to listening through atmospheric static and government jamming, but it remains the only medium capable of delivering daily news into all of North Korea.

Some respondents reported viewing of foreign TV broadcasts. Reception is typically limited to border areas because signals from South Korean and Chinese stations don’t reach more than a few tens of kilometers into the country.

Along the northern border, Yanji TV from China was watched weekly by 15 percent of those surveyed. Only 4 percent reported weekly viewing of South Korea’s KBS. The lower number probably doesn’t reflect a relative lack of popularity but rather a smaller number of survey respondents from southern provinces and technical differences between the North and South TV standards.

While many North Koreans still have no direct access to foreign information sources, the report found those with direct access are increasingly willing to share thinformation they learn with their family and trusted friends.

If representative of wider North Korean society, the findings suggest that fewer North Koreans are willing to report on each other than before. In the past, some defectors have talked about hiding their foreign media consumption from members of their own family for fear of getting reported to authorities

But getting caught accessing foreign media, such as cross-border radio, remains risky and penalties can be severe, the report said.

The entire report can be downloaded from the InterMedia website.

(Disclosure: InterMedia provided domestic travel for me to attend the report launch and asked me to speak at the event.)