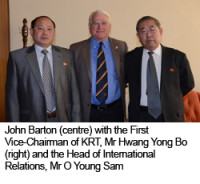 The Asia Pacific Broadcasting Union has agreed to supply North Korea with live TV coverage of the 2012 Olympic games.

The agreement was reached during a meeting in Pyongyang between Kim In-Kyu, president of the ABU, and representatives of Korea Central Television (조선중앙텔레비죤).

Kim went to Pyongyang specifically to work out a relay for Olympic TV coverage after South Korea’s Seoul Broadcasting System (SBS) acquired rights for the Korean peninsula. No deal between SBS and KCTV was forthcoming.

The ABU is a grouping of TV broadcasters in 60 countries.

The two parties also agreed to “find ways to further the cooperation between ABU and KCTV” although no further details of that was announced. The ABU said its delegation is scheduled to “hold meetings with KRT to seek cooperation in technical, contents and training programs.”