Earlier I wrote about a new Android tablet computer called Samjiyon that was on show at the 8th Pyongyang Autumn International Trade Fair. Some of the images came from a KCNA video that also included some other highlights from the fair, including other pieces of technology.

The fair lasted from Monday to Thursday and including, according to KCNA, “more than 210 companies and entities from 10 odd countries and regions, including the DPRK, China, Netherlands and Germany.”

Here’s some screen grabs from the report (click the images for a larger version).

First refrigerators from what appears to be China’s Shangling Electric Appliances. One of the refrigerators has a TV with DVD player built into the door.

Next, something I was surprised to see: washing machines from Japan’s Panasonic. They appear to have come through a Chinese subsidiary.

I can’t make out the company name, but they’ve got lots of flat-screen TVs:

Here are some more laptops. In this shot you can see the price of one of the computers: US$ 330.

And a couple of final screen grabs: solar panels from China’s Dandong Xiang Ao Development and an Epson printer, although it’s unclear if the printer on sale or there to demonstrate a photo printing service.

In addition to the KCNA video, the government-run news agency also carried a few photos. Some repeat scenes seen in the video but there is one that reveals another well known international brand. Here are more laptops from Taiwan’s Asus: 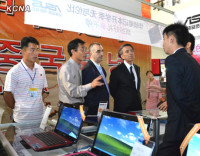