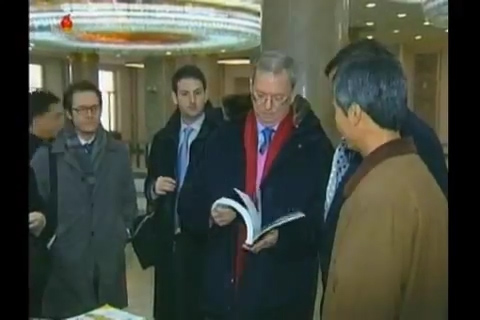 Google Chairman Eric Schmidt has posted some thoughts on his recent trip to Pyongyang. The comments appeared on his Google Plus page on Saturday, the same day his daughter also posted her impressions of the trip.

The executive’s comments won’t provide any big revelations, at least they shouldn’t to readers of this blog. He generally reiterates that it was a private visit aimed at exploring some of the technology in North Korea and exchanging views with local officials.

On his arrival in Beijing after leaving Pyongyang, Schmidt told reporters he had advised the North Koreans to open up to the Internet. If they didn’t, he said, the country risks being left even further behind.

On Saturday, his daughter posted that North Korean officials appeared to acknowledge the country would have to embrace digital connectivity.

Here is an edited version of my comments when Governor Richardson’s delegation returned from Pyongyang:

I wanted to thank Governor Richardson for inviting my crew along on this trip. This was a private visit to North Korea to talk about the free and open Internet. The North Koreans showed up, listened to us and asked us a lot of questions.

There is a 3G network that is a joint venture with an Egyptian company called Orascom. It is a 2100 Megahertz SMS-based technology network, that does not, for example, allow users to have a data connection and use smart phones. It would be very easy for them to turn the Internet on for this 3G network. Estimates are that are about a million and a half phones in the DPRK with some growth planned in the near future.

There is a supervised Internet and a Korean Intranet. (It appeared supervised in that people were not able to use the internet without someone else watching them). There’s a private intranet that is linked with their universities. Again, it would be easy to connect these networks to the global Internet.

They also demonstrated their software and technology based on open source (mostly Linux) and it was obvious to us that access to the Internet and all of this was possible for the government, the military, and universities, but not for the general public.

As the world becomes increasingly connected, the North Korean decision to be virtually isolated is very much going to affect their physical world and their economic growth. It will make it harder for them to catch up economically.

We made that alternative very, very clear. Once the internet starts in any country, citizens in that country can certainly build on top of it, but the government has to do one thing: open up the Internet first. They have to make it possible for people to use the Internet, which the government of North Korea has not yet done. It is their choice now, and in my view, it’s time for them to start, or they will remain behind. — Eric Schmidt, Google Plus, January 19, 2013.

1 Comment on "Eric Schmidt on his North Korean visit"