North Korea’s KCNA news agency carried some images on Thursday of what it claims is North Korea’s latest computer.

The machine, called “Noul” (??), was developed by Noul Technology Joint Venture and it targeted at industrial applications, KCNA said. It’s available in two models: one with a 5.7-inch screen and one with a 10.4-inch screen.

The KCNA report said it’s already in use at Kim Chaek Iron and Steel Complex, Huichon Power Station, Pyongyang Cornstarch Factory and other facilites. Its life it twice that of a conventional PC in an industrial environment because it’s shielded from temperature, humidity, rays and vibration, reported KCNA.

The daily Rodong Shimun newspaper carried a report on development of the computer in January.

Both reports noted the Korean-language interface and that might indeed be the real innovation here. North Korean media has in the past touted domestically-built computers but they are actually machines from Chinese manufacturers that have been localized with Korean software.

The country’s computer hardware industry isn’t that well established but it does have a higher level of expertise in software design, so it would make sense to buy a commodity hardware device like a computer and spend energy on developing its software for domestic use.

If anyone recognizes the computer, which carries the “SH-512A” model name in one image, please post details in the comment section. 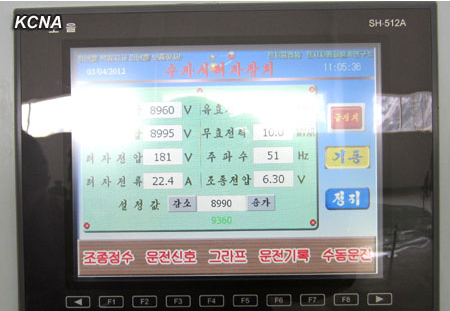