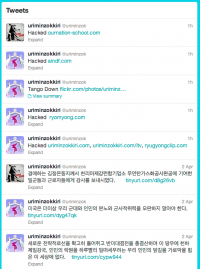 This week’s hack of the Uriminzokkiri website certainly raised the bar in the cyber battle currently playing out online.

It marked the first time in the current round of attacks that anyone had managed to break in and deface a North Korean website. Over the last couple of weeks, several sites have been taken offline by denial of service attacks, but such attacks simply impede the website’s ability to serve pages and don’t affect the content.

Four of Uriminzokkiri’s companion sites were also hit. One, AINDF.com, still displays a poster of Kim Jong Un depicted as a pig, while Ryugyongclip.com, Ryomyong.com and Ournation-school.com are offline.

From an analysis viewpoint, perhaps most interesting was the roughly 15,000 user account details that were also published. They are providing a fascinating profile of the type of people who registered with the site.

The details were released in two batches with the second of around 6,000 names coming on Saturday.

Some North Korean sites still appear to be under sporadic denial of service attack.

A lot will probably depend on the situation on the Korean peninsula. If tensions continue to rise, expect the attacks to continue. If things fall back to normal, North Korea won’t have such a high profile in news headlines and some attackers are likely to move on to other targets.