The Korean Central News Agency (KCNA) has attacked claims by international hacker collective Anonymous that it managed to steal North Korean military secrets from computer servers. The attack came in a commentary on Friday, just days before Anonymous plans to launch a cyber-attack on North Korean websites.

Earlier this week, a Twitter user claiming to represent Anonymous hackers said the group had managed to infiltrate North Korean servers on the country’s domestic intranet and access sensitive information.

“We completed serveral attacks on your internal Websites and inside your local intranets,” the group said in a message posted to the Pastebin website, which allows users to post text messages without revealing their personal details.

“Previously we said we would penetrate the intranet and private networks of North Korea. And we were successful,” the message said. 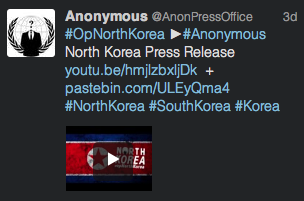 “Your major missile documentation and residents, military documents show down is already in progress. Your attempt to cover this has been uncovered. We are partially sharing this information with the world.”

The veracity of the Anonymous claim is difficult to ascertain. The group has yet to post a single piece of information that could have been gained in an attack on North Korean servers and it seems unlikely that military secrets would be stored on servers accessible from the controlled but open domestic intranet.

But whether it’s managed to infiltrate domestic servers or not, its threat of an attack on June 25 certainly has the attention of KCNA.

“The international hacking group Anonymous is letting loose a string of rubbish regarding the DPRK as the goal of cyber attack,” the state-run news agency said in the commentary.

“It announced that it would conduct hacking attack called ‘operation for infiltrating into interior of the north’ with June 25 as an occasion and calculates this would help shake the social system in the DPRK. Anonymous made up of riff-raffs dares hurt the social system of the DPRK, not content with doing bad things to demonstrate its technology. This provokes side-splitting laughter.”

The commentary is classic KCNA. Frst rubbish your opponent, then rubbish its claims.

Last time Anonymous turned its attention towards North Korea, the result wasn’t pretty. The country’s major websites — including that of KCNA — were inaccessible for days and the 15,000-member user database of Uriminzokkiri, a China-based site with close DPRK ties, was published.

“It hacked into open servers of the DPRK without any secret data by use of poor hacking programs. And now it is busy describing it as a sort of big technological feat.”

It’s probably safe to say that if North Korea didn’t have the full attention of Anonymous hackers, it does now.

“Anonymous, in fact, knows nothing about the DPRK. The Network Kwangmyong Anonymous claimed hacked into it does not exist in the DPRK.”

North Korea’s domestic intranet has been well-documented and well-reported, both in the North Korean media and by outsiders who have used it within the country, so it’s existence isn’t in doubt.

Could there perhaps be confusion over the name? Is KCNA denying its existence on a technicality?

In 2002, KCNA reported on the development on the “Kwangmyong” system:

“In recent years it developed an information retrieval system Kwangmyong and established a computer network for science and technology to make a variety of information service.” — KCNA, “DPRK Central Information Agency for Science and Technology,” August 13, 2002.

And a year earlier The People’s Korea, a Tokyo-based English-language newspaper published by the DPRK-aligned Chosen Soren, reported on the Kwangmyong network too. 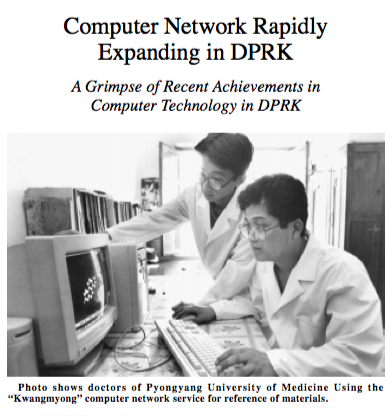 2 Comments on "KCNA hits back at Anonymous"