The most popular North Korea-related YouTube channel was deleted by the video website on Wednesday for copyright infringement.

[April 26 update: The channel is now back. Read on for details of how that happened]

The Stimme Koreas channel had amassed around 15 million views for the hundreds of videos it hosted, ranking it above second-placed North Korea Today.

It had attracted more than 12,000 subscribers but today all those subscribers saw was a blank page with a message from YouTube:

“YouTube account stimmekoreas has been terminated because we received multiple third-party notifications of copyright infringement from claimants including: DPRKMusicChannel.”

A YouTube message seen on the Stimme Koreas channel on April 23, 2014.

The deletion appears to be the result of a misunderstanding between the two channels, which are both believed to be operated by North Korean supporters outside of the country.

After the deletion, the owner of the StimmeKoreas channel took to Facebook to tell his followers what had happened and that elicited a response from the DPRK Music Channel: “your channel will be back as soon as it is possible. Sorry for my pathetic actions. I hope you can forgive me.”

Further messages indicated it was the result of copyright claims made by DPRK Music Channel. 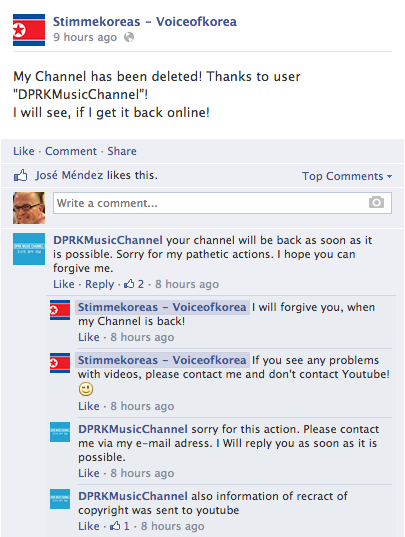 This message was posted to the Stimme Koreas Facebook page on April 23, 2014

YouTube allows users with a certain number of views and followers to “claim” videos they upload as their own work.

If that is done then YouTube’s backend systems will flag videos on other channels that contain the same video images or audio.

The system was introduced several years ago in response to complaints of copyright infringement by Hollywood studios.

If a channel receives a certain number of copyright claims, YouTube will often proactively delete or disable the channel.

The operators of both channels could not immediately be reached for comment.