The planned expansion of the U.S. missile defense shield to guard against potential threats from North Korea and other nations will cost $5.8 billion over the coming years, according to an estimate released this week.

The estimate was made by the Congressional Budget Office (CBO) in response to a question from Jeff Sessions, a Republican senator for Alabama and a member of the Senate Subcommittee on Strategic Forces. They examine the cost of the system over the last few years and its likely cost over the coming five years.

It reveals that the Missile Defense Agency’s Ground-Based Midcourse Defense (GMD) program has cost just under billion from 2008 to 2014 and will cost more than a billion dollars over each of the next four years and close to a billion dollars in 2019.

The system currently consists of 30 interceptor missiles, 4 at Vandenberg Air Force Base in California and the remainder at Fort Greely in Alaska. Just last week, the Missile Defense Agency began work on environmental impact studies at four proposed expansion sites.

The figures include tests, support work and maintenance in addition to research and development work and were based on Department of Defense budget justification documents, according to the CBO. 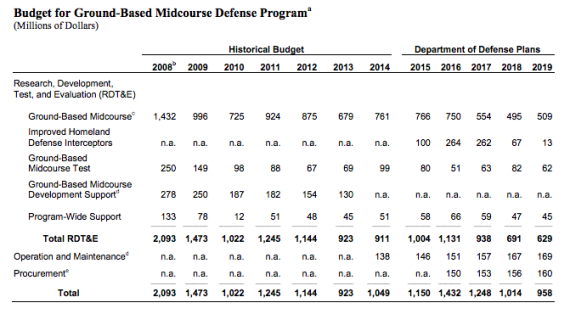 The CBO noted that from 2014, some GMD activities were moved to the operation and maintenance cost line at Congressional direction.

“The individual projects within the RDT&E category have changed in both name and project content over the years. To better display trends in budgets for specific activities over time, CBO used the list of projects in the Fiscal Year 2015 budget for the attached table and presented the budget for projects in earlier years using those categories.”