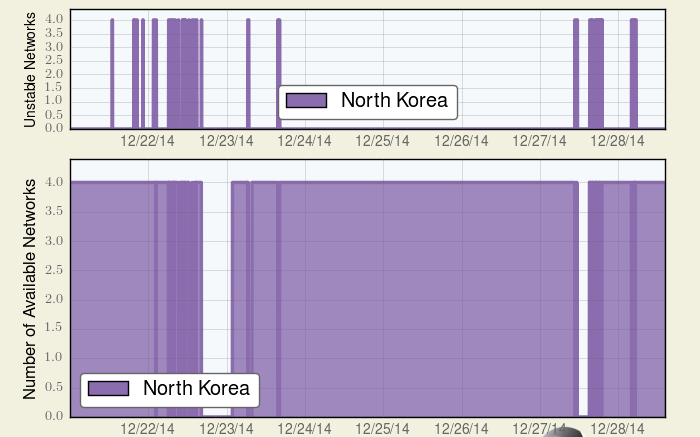 Outages between North Korea and the Internet from December 23 to December 28, 2014

North Korea’s Internet connection with the world suffered outages on December 27 and December 28.

The latest instability on the connection began around 0400 UTC (1 p.m. local time in Pyongyang) on Sunday and continued for a couple of hours, according to monitoring by Dyn Research. The U.S.-based organization recorded several instances in which connections to the four sub-networks that make up the North Korean Internet were completely unavailable. 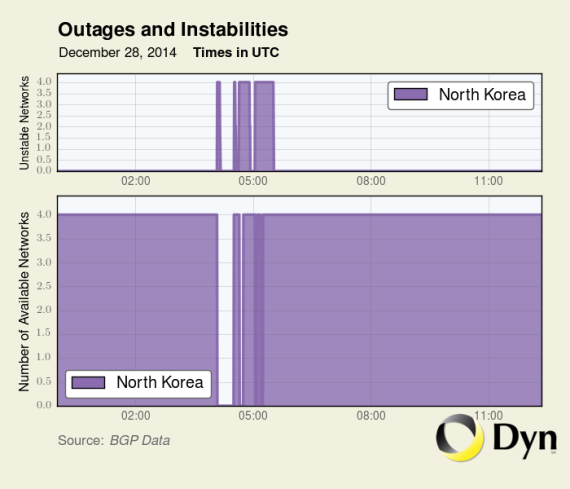 An outage between North Korea and the Internet on December 28, 2014 (Image: Dyn Research)

The outage followed a larger one on Saturday evening that appears to have begun at around 1040 UTC (7:40 p.m. local time in Pyongyang), said Dyn Research.

Saturday’s outage was the first major problem to hit the country’s Internet connection in three days and affected connectivity on both local Internet and 3G connections, said a Xinhua reporter in Pyongyang.

“At Pyongyang time 7:30 p.m. Saturday, DPRK’s Internet and 3G mobile network came to a standstill, and had not returned to normal at press time as of 9:30 p.m. Saturday, according to Xinhua reporters and Chinese facilities based in the country,” the news agency reported. 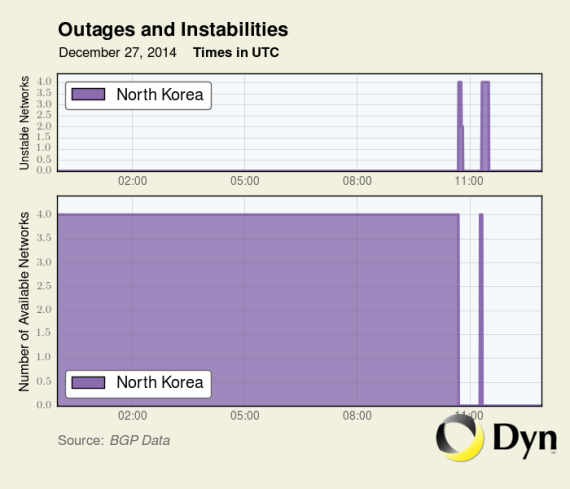 An outage on North Korea’s Internet connection on December 27, 2014

The latest two outages are similar to others that hit the country on Tuesday.

Those were believed to be the result of a denial of service attack, which involves flooding computers with so many requests that they become unavailable and cannot handle legitimate traffic. Such attacks are different from hacking because they don’t involve breaking into websites or causing damage.

The U.S. denied involvement in the earlier attacks, which were later claimed by two Internet hacker groups.

Despite that denial, North Korean state media blamed the U.S. for the problems.

“The U.S. … started disturbing the internet operation of major media of the DPRK, not knowing shame like children playing a tag,” the National Defence Commission said in a statement carried on the Korean Central News Agency.

Here’s a look at North Korea’s Internet trouble since December 21: 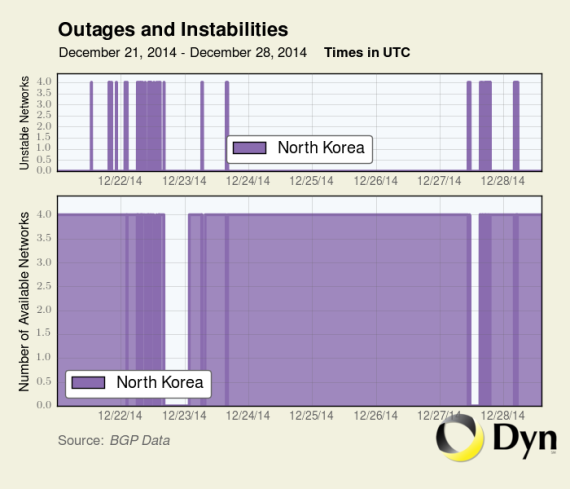 Outages between North Korea and the Internet from December 23 to December 28, 2014 (Image: Dyn Research)