North Korea suffered its first multi-hour Internet outage of the year when all connectivity with the country was lost for three hours.

The country’s Internet connection dropped just after 15:00 UTC Wednesday, which was shortly before midnight local time in Pyongyang. It remained down for almost three hours before returning at 1800 UTC (2:30am local time Thursday), according to Dyn Research.

The outage meant none of the handful of North Korean websites hosted on servers in Pyongyang were accessible to the rest of the Internet. It would have also made it impossible for North Korea’s handful of Internet users to connect to sites around the world.

The reason for the outage is unclear, but similar occurrences have happened before. It’s likely due to a technical reason, such as the need to update software, reconfiguration of the network or perhaps the crash of some networking hardware. A power failure could also be to blame, but from the outside it’s difficult to say what the problem was.

The outage comes shortly after North Korea stepped up its filtering of the Internet.

The vast majority of North Koreans don’t have the ability to access the Internet. Those that do are monitored to ensure they don’t stray onto websites the government doesn’t want them to access. 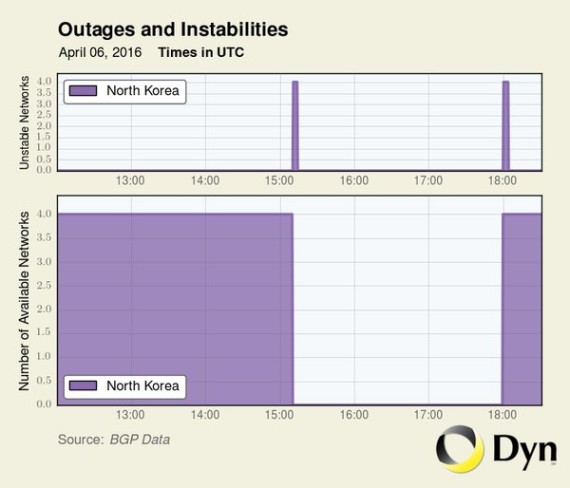 A graph showing an outage in North Korea’s Internet connectivity from April 6 to 7, 2016. (Image: Dyn Research)