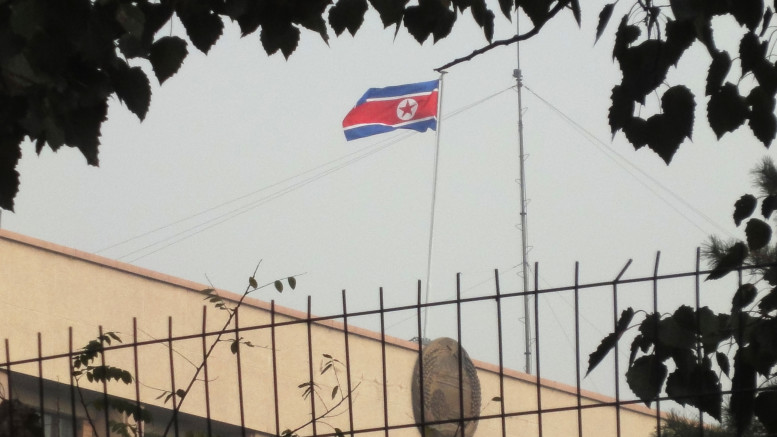 A flag are radio mast are seen above the North Korean embassy in Beijing, China, in October 2010 (Photo: North Korea Tech)

Before it is even published, North Korea has come out swinging against an upcoming report by the United Nations Security Council’s Panel of Experts on North Korea. The report, which is expected to be published on September 6, alleges the country has generated about $2 billion from cybercrime and funneled the money into its weapons of mass destruction (WMD) program.

News of the allegations first appeared a month ago when Reuters reported:

The report says the amount of money raised is around $2 billion.

On Sunday, the North’s grandly-named “National Coordination Committee of the DPRK for Anti-Money Laundering and Countering the Financing of Terrorism” issued a statement through KCNA that disputed the claim:

The United States and other hostile forces are now spreading ill-hearted rumors that we have illegally forced the transfer of two billion US dollars needed for the development of WMD programs by involving cyber actors.

A question being raised is on such fabricated information, unreasonably accusing us with no scientific ground, reflected even in the Midterm Report of the Panel of Experts of the Sanctions Committee against the DPRK, the UN Security Council, which we have never ever recognized.

The fabrication of such a sheer lie by the ringleaders of cyber crime and all other crimes is quite an absurd act aimed at re-enacting the same old trick as the Hitler fascist propagandists used to cling to, often saying “Tell a lie a hundred times and it will pass as a truth.”

Such a fabrication by the hostile forces is nothing but a sort of a nasty game aimed at tarnishing the image of our Republic and finding justification for sanctions and pressure campaign against the DPRK.
We hereby warn that we will never ever tolerate any impudent act which impairs the dignity of our state and therefore, we will calculate, once and for all, the acts committed.

The committee attributed in the report has been putting out similar statements since 2015, usually in response to allegations of money laundering. The group says the DPRK is committed to stopping money laundering but, of course, it continues. North Korea has a vast and complex money raising machine that earns cash for the ruling regime through legal and illegal means.

In recent years, the country has been accused of several high-profile cyber attacks aimed at banks and crypto-currency exchanges.