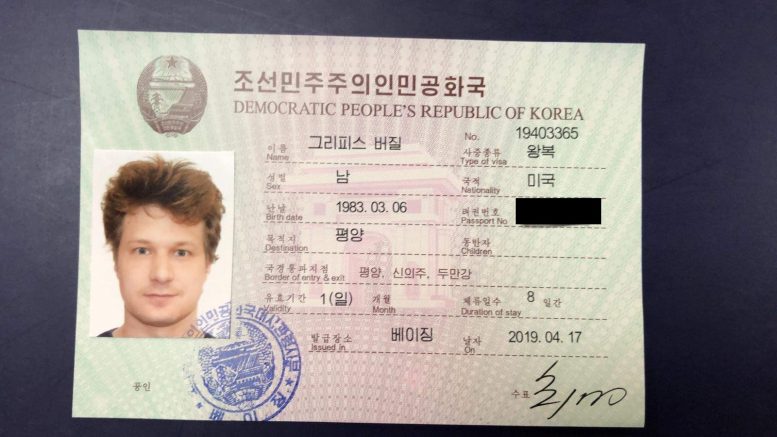 Virgil Griffith, a U.S. cryptocurrency expert, was arrested in Los Angeles on Thursday accused of violating U.S. sanctions against North Korea for this attendance at a cryptocurrency conference in Pyongyang in April this year.

Griffith, who is due to appear in federal court later on Friday, is charged with conspiracy to violate the International Emergency Economic Powers Act.

The charge stems from his attendance at the April 2019 “Pyongyang Blockchain and Cryptocurrency Conference,” which took place in Pyongyang on April 23 and 24. Griffith is an expert in cryptocurrency applications and the dark web and currently holds a position as a research scientist at the Ethereum Foundation, which promotes the Ethereum blockchain platform.

Before making his trip, Griffith applied to the Department of State for permission to attend but was denied, according to the criminal complaint. He traveled anyway.

U.S. sanctions against North Korea prohibit the exporting of “goods, services or technology” that help the DPRK to “evade or avoid” sanctions by U.S. persons, which are citizens and permanent residents anywhere in the world. Griffith is a U.S. citizen who lives in Singapore, according to the complaint. The sanctions also ban the provision of a wide range of services, including legal and financial services, to anyone in North Korea.

Griffith was interviewed by the Federal Bureau of Investigations in May in New York, according to the complaint, and detailed how he arranged a visa through the North Korean mission in New York. While U.S. sanctions prohibit unauthorized travel to North Korea, the North Koreans only had three restrictions: no Japanese, South Koreans or Israeli citizens. The website for the 2019 conference specifically mentions that U.S. citizens are welcome to apply.

On August 13 this year, Griffith even tweeted a photo of his North Korean visa. 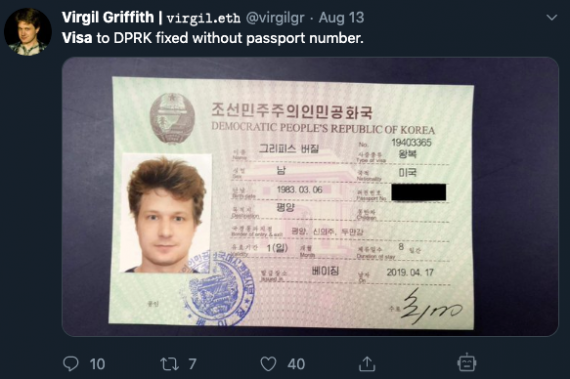 Also in the FBI interview, Griffith said he was told by a conference organizer to “stress the potential money laundering and sanction evasion applications of cryptocurrency and blockchain technologies as such topics were more likely to resonate with the DPRK audience.”

The complaint also alleges that Griffith also began planning to transfer cryptocurrency between North and South Korea — a further sanctions violation. In a November 12 interview with the FBI in San Francisco, Griffith is said to have allowed a search of his phone messages. Among the messages found was one from Griffith seeking to make the international transfer and, when asked “Isn’t that violating sanctions?”, his reply “it is.”

The blockchain conference in question was organized by the Korean Friendship Association (KFA), a group led by Spaniard Alejandro Cao de Benos. He is a one-man publicity machine for the ruling North Korean regime and his KFA is unfailing in its support for the country. The group often arranges trips to North Korea for foreigners.

After the conference, little information about it was made public and it was difficult to verify how many people took part or what presentations were delivered, but the criminal complaint against Griffith says there were about 100 attendees.

North Korea’s use of cryptocurrency is increasingly drawing attention. The country has been blamed for cyber attacks on cryptocurrency exchanges and ransomware attacks that demanded payment in Bitcoin. Cryptocurrency is largely unregulated and anonymous so it does provide a potential platform on which North Korea can make payments independent of the international financial system.

The KFA is currently planning to hold a second blockchain conference in Pyongyang in April 2020.