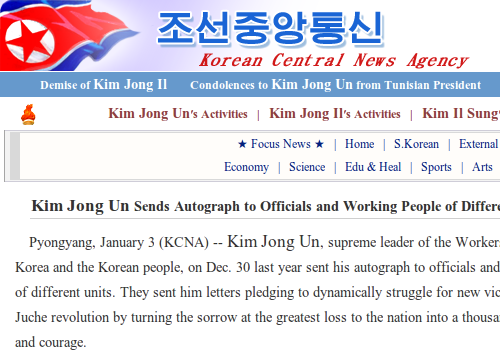 The sudden death of Kim Jong Il has North Korea’s propaganda machine scrambling to build stories about the life of Kim Jong Un.

The stories are a staple of the North Korean media and occupied hours of broadcast time and columns of newsprint during the era of Kim Jong Il.

Designed to build a personality cult around the leader, his tireless work for the people, warm heart, tough travel schedule or boundless knowledge were all regular features.

Some of the first such stories about Kim Jong Un appeared in the days shortly after Kim Jong Il’s death when state media reported on Kim Jong Un’s “warm love” for the people of North Korea.

With all the people wailing over his death, Kim Jong Un, vice-chairman of the Central Military Commission of the Workers’ Party of Korea, took special measures to set up more service facilities for mourners’ health around the mourning sites.

He also gave instructions to officials to make an on-site survey of the situation and offer every possible convenience to the mourners.

According to his instructions, more medical and hot drink service facilities and ambulances appeared in the mourning sites early Saturday morning. — KCNA, December 24, 2011.

The on January 8th, believed to be Kim Jong Un’s birthday, a documentary aired on TV that showed the new leader threatening war if the country’s missiles were shot down and coverage of his life is now appearing in state media.

This week has seen the addition of a new section on KCNA’s website that collects together news reports related to him. Entitled “Kim Jong Un’s Activities,” the section can be found in all five language versions on the site.

At time of writing there’s just a page of news but that will grow and grow as the days go on.