North Korea’s state news agency published a couple of images on January 4th that appear to show Pyongyang factory workers checking or testing laptop computers. But a closer look reveals something odd about the pictures.

The images were published with a brief caption that claimed: “Employees of the Electronics Corporation under the Ministry of Electronics Industry work hard to develop new varieties of products in response to the call of the joint New Year editorial.”

The New Year Editorial, a staple of North Korea and annual indicator of the state’s priorities in the coming year, called this year for the country to continue development of new technologies to enhance the country’s self-sufficiency. That lies at the heart of North Korea’s “Juche” policy.

The latest pictures from KCNA appear to show the larger of the two laptops publicized on TV in March 2011, but look closely and you’ll spot the computers are not plugged in. The screens are blank and none of them appear to be switched on. 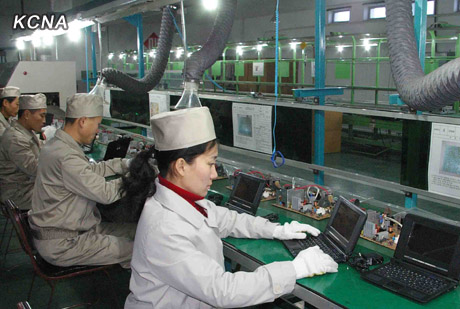 The production line workers are wearing similar overalls to those seen in the previous TV report, but the production line desk is different. It’s possible the desks featured in the March 2011 TV report are those in the background on the opposite side of the room, but there wasn’t enough quality in the TV report to tell.

Furthermore, the circuit boards on the work bench behind the laptops don’t appear to have anything to do with the computers. It’s difficult to tell exactly what they are for, but they look more like something you’d find in a television that a computer.

On the plus side, the work benches appear to be equipped for electronics manufacturing. There are ventilation hoses above the work stations and anti-static wrist bands hanging down.

It looks like the laptops were lined up on the benches for a staged photo. 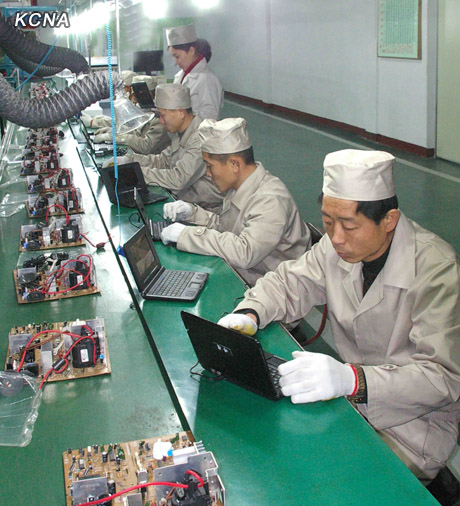