Rodong Sinmun, the newspaper of the Workers’ Party of Korea and North Korea’s main national daily, has launched an English-language website.

The page appears to have come online in the last few days but has a small archive of stories stretching back to December 1. It’s the first foreign language to be offered by the newspaper and comes just under 11 months since the launch of a Korean site.

Those with an interest in North Korean affairs will welcome the site but a quick review of the content initially offered shows much of it consists of stories already available via the Korean Central News Agency. Many of the news articles are verbatim copies of KCNA stories.

Some of the content appears to be original and is attributed to the newspaper or sometimes to a specific author.

Notably, the Enlgish-language Rodong Sinmun website doesn’t print the name of Kim Jong Un, Kim Jong Il or Kim Il Sung in a bold or large font as is done on other North Korean websites. The three names are given the large font treatment on the Korean version of the site so it’s probably only a matter of time before that’s added to the English site.

The website represents the latest push by North Korea’s state media to present its news and propaganda to an international audience. In 2011, KCNA added Chinese and Japanese news articles to its selection, the Voice of Korea shortwave radio service began offering audio clips in eight languages and the quasi-official Uriminzokkiri site also added a Russian version.

(Thanks to Steve Herman for the tip!) 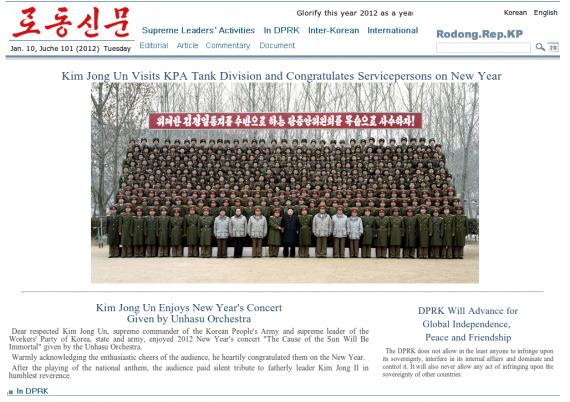