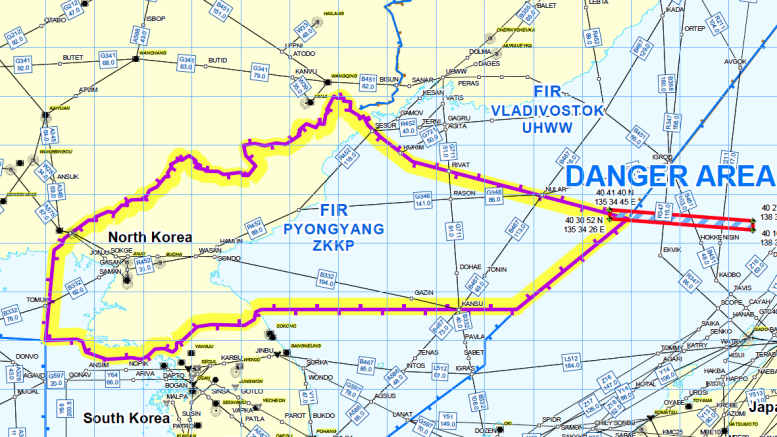 Last week I wrote about the U.S. Federal Aviation Administration’s regulations on U.S. carriers or aircraft using North Korean airspace. They prohibit flight in most of the skies controlled by Pyongyang but allow it — with caution — in a portion east of 132 degrees East latitude.

The ban is in place because of North Korea’s unpredictable short- and medium-range missile launches and uncertainties over just how good the coordination is between civil air traffic controllers and the military. The rules are in place to avoid an aircraft getting shot down, either by mistake or due to a misunderstanding.

So, I decided to take a closer look at what airlines, if any, use North Korean airspace.

I recorded a day’s worth of activity on Flightradar24, which maps the world’s air travel in realtime. The data for East Asia comes from volunteers in Japan, South Korea and Russia with radios that receive ADS-B transmissions from aircraft and feed them to the site. The data identifies the flight, speed, altitude and current location. Not all of North Korean airspace is covered, so domestic flights are generally missed, but most others were caught.

As can be seen, the North Korean skies are a good deal less busy that those of neighboring Japan and South Korea but air traffic controllers in Pyongyang aren’t idle all day. Several European airlines, which are not subject to FAA rules, fly through the area each day, including on the western side of the 132 degrees East latitude line, which the FAA has said is too dangerous for U.S. carriers.

The flights, operated by Lufthansa, Air France, Turkish Airlines, KLM and Finnair, are between Europe and the central and west Japan cities of Nagoya and Osaka (Kansai International Airport). 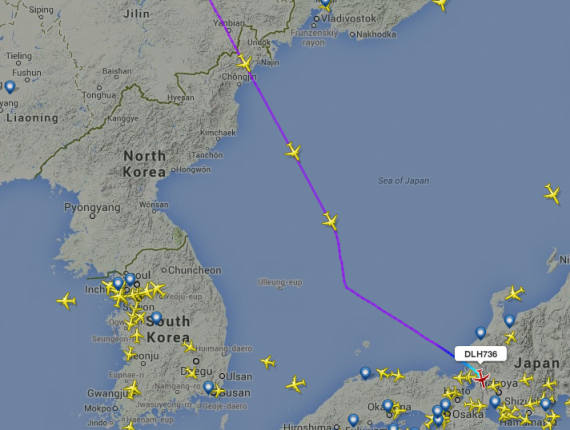 Lufthansa’s LH736 is followed by three other aircraft through North Korean airspace on Saturday, July 26, 2014.

Not surprisingly, the same airlines take the same route when going home. Flights to Europe from Tokyo’s Narita and Haneda airports stay outside of North Korean skies because they are further east.

Here are the European flights I found:

From Seoul, flights on Russia’s Aurora Airlines HZ 5636 / 5637 will take passengers through North Korean-controlled skies, but the airline appears to deliberately avoid the area where U.S. flights are banned. At the 132 degees East line, it makes a dog-leg and continues on its journey between Vladivostok and Seoul’s Incheon airport. 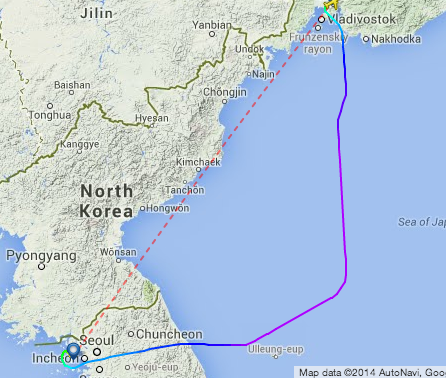 South Korea airlines avoid North Korean airspace in its totality, as you might expect. Here’s the Asiana flight from Incheon to Vladivostok, OZ 570. It adds about 35 minutes to the flight time. 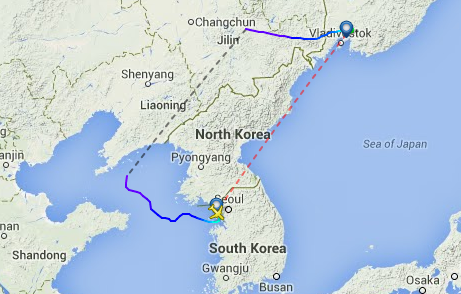 For perhaps the best view of North Korea without actually going there, China Southern Airlines offers a flight between Tokyo’s Narita and Shenyang that flies directly over the country, crossing close to Pyongyang. 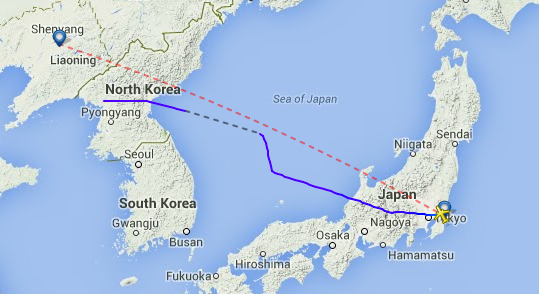 CZ628 from Shenyang to Tokyo’s Narita, shown flying over the heart of North Korea.

It was this flight that North Korean missiles came close to hitting back in March. The missiles passed through the airspace the jet had occupied just 7 minutes earlier.

It’s easy to see why that might happen. Rather than crossing perpendicularly, the China Southern flight heads directly to and from the country, along the same rough path as the missile test firings.

Japan’s All Nippon Airways takes a very different route for its NH 925 / 926 that flies between the same two cities. The difference in flight times? 25 minutes. 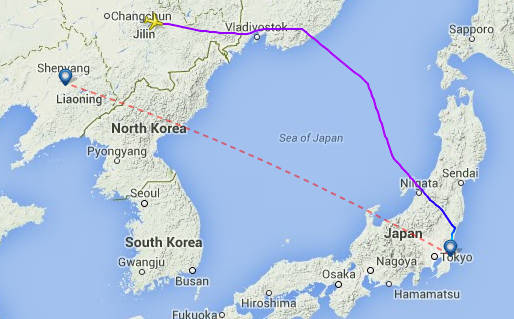 All Nippon Airways NH 926 avoids North Korean airspace when it flies from Shenyang to Tokyo.

In fact, China Southern’s direct path over North Korea en-route to Shenyang is all the more surprising considering its CZ 631 / 632 between Kansai and Harbin flies around North Korean skies rather than taking a more direct route.

Because Flightradar24 doesn’t have anyone contributing data from North Korea, coverage of the skies above its land is spotty, but you can spot a flight in the animation running from Pyongyang to Vladivostok and back. It’s Air Koryo JS 271 / 272. 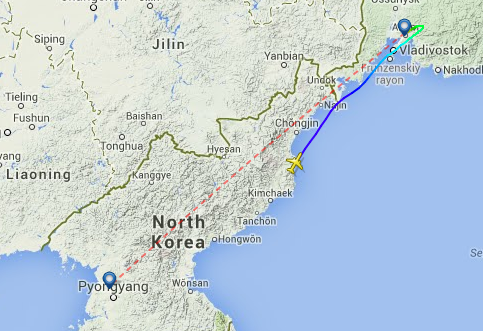