Uriminzokkiri, the China-based website that carries North Korean news to the world, was the center of attention earlier this month when its Twitter and YouTube channels were hacked.

Four Twitter messages and a YouTube video denigrating Kim Jong Il and his son, Kim Jong Un, were posted on Jan. 8, which is reportedly the birthday of the younger Kim.

The YouTube channel was reinstated within a few days and is back to its usual diet state-TV clips and videos produced by the website, which appears to have close ties to Pyongyang.

However, two weeks on from the hacking and Uriminzokkiri appears to still not have control of its Twitter account. 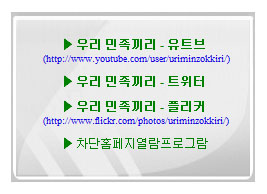 The four messages remain visible and nothing has been posted since then, pointing to the possibility that the password to the account was changed and Uriminzokkiri is locked out of the channel.

It had around 10,500 followers when the messages were posted, a number that jumped by about a thousand when news of the hack hit the headlines.

A link to the Twitter channel has been removed from a box on the website (see image, right.)

Here’s my original post on the hack, which includes a user-supplied translation of the four messages.