Free North Korea Radio, one of the handful of independent broadcasters targeting North Korea, attracted a direct connection to its website from inside the DPRK on Wednesday morning.

The site said an incoming connection from North Korea was recorded between 9:30am and 10am on Wednesday morning. It included the following screenshot (see below) from its site showing a connection from what appears to be within the North Korean IP address range that’s recently been activated by Star JV.

Free North Korea Radio, based in Seoul and run by defectors from the north, broadcasts programming critical of the regime. A direct connection from North Korea could be someone interested in the station’s subversive message, or it could just as easily be a scan of the site’s contents by the North Korean regime.

Such traffic would typically be sent through a proxy server, a server in a third country that would effectively mask the connection as coming from North Korea. That the connection came direct could be an error or point to an unsophisticated user.

A further possibility is that it came from one of the many foreigners in North Korea who seem to have more freedom in their Internet access.

Additionally, the radio station says its website was hit by a denial of service attack on Tuesday afternoon. The organization says it was flooded with traffic for four hours between 3pm and 7pm forcing its website offline.

The attack comes shortly after hackers in South Korea attacked the Uriminzokkiri website and took it offline. Uriminzokkiri carries Korean-language news from North Korea’s official media and is based in China but appears to have close ties to Pyongyang. Hackers also broke into Uriminzokkiri’s Twitter and YouTube accounts and posted content that criticized Kim Jong Il and his son, Kim Jong Un.

The attacks on Uriminzokkiri were claimed by users of South Korean website dcinside.com. 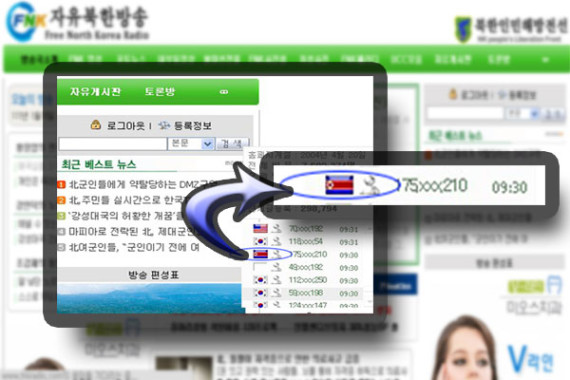