The number of requests by South Korean police for the deletion of Internet content alleged to be pro-North Korean has soared in the past two years, according to a report in the Dong-A Ilbo.

Police submitted 80,449 requests to the Korea Communications Standards Commission for the removal of online postings in 2010. That compares to 14,430 in 2009 and just 1,793 in 2008 and represents a 45-fold increase over the last two years, the newspaper said.

The annual deletions of North Korean content were pretty constant during the middle of the last decade at between 1,000 and 1,500 per year. They began to spike in 2009 when the conservative Lee Myung Bak administration came to power. 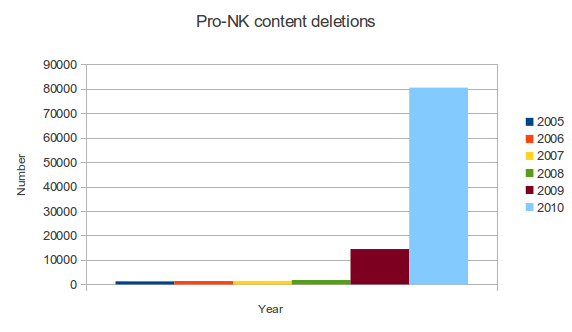 The Dong-A Ilbo said the spike in 2010 was due both to increased police powers and one major event:

Most of the postings reiterated the North`s claims on the sinking of the South Korean naval corvette Cheonan last year and denunciation of the South for undermining inter-Korean relations. — Dong-A Ilbo, September 17, 2011.

The information was contained in a report to ruling Grand National Party Rep. Park Dae-hae.