Regular readers of The Rodong Sinmun, the official newspaper of North Korea’s Workers’ Party, might be forgiven for thinking the newspaper has a correspondent in South Korea. The newspaper, now available in English via its website, offers a page of inter-Korean news complete with photographs of demonstrations happening in Seoul.

But where are they coming from? A little investigating reveals the pictures are mostly cropped versions of photos taken by South Korean news organizations. They aren’t cropped to change the meaning of the image — they’re cropped to remove the logo of the news agency that holds the copyright.

Yonhap says it doesn’t have a deal with KCNA or the Rodong Sinmun for them to access Yonhap material. While it’s possible the Rodong Sinmun licensed the image from a Yonhap distributor, the cropping of the image and the Rodong’s similar use of images from other sources makes it likely the newspaper is pulling them off the web.

Take a look at the most recent headline that was accompanied by an image, “With Resolution to Put End to Subsidized Broadcasting,” from February 11. The link points to a page that doesn’t contain a story but has this image: 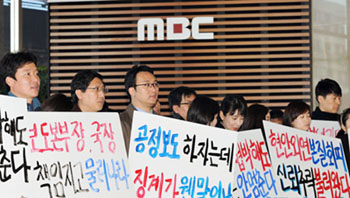 Now take a look at the same picture, side-by-side with a photograph from South Korea’s Voice of People:

The pictures are identical, except for the cropping that has removed the lower part of the image with the VOP watermark. If you enlarge the Rodong Sinmun image you can see a hint of the blue VOP logo: 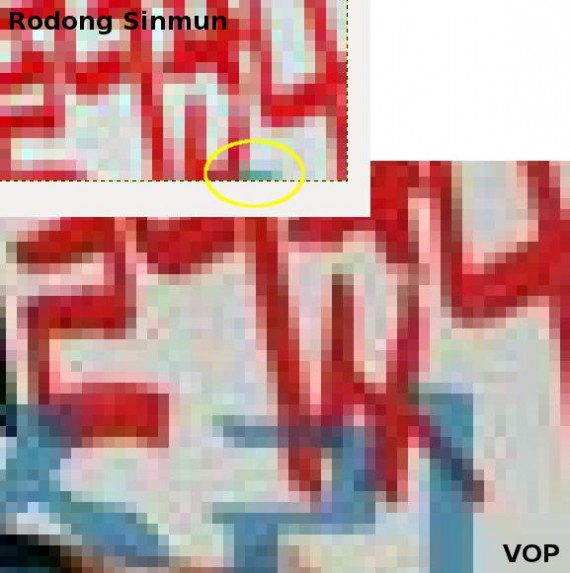 The crop is a little difficult to see so here’s another example, this time accompanying the story “The South Korean Students Protest Against Ruling Party’s Cyber Attack” on January 28th: 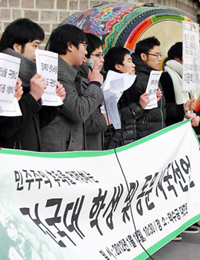 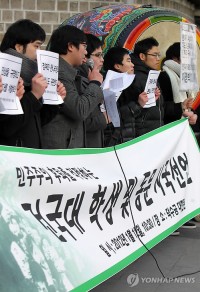 The cropping on this picture is much tighter and removes both the logo and some of the journalists and crowd on the left hand side, but it’s the same image.

It’s not just Yonhap Photos being used. Here’s a photo carried in the January 16 article “S. Korean Policiemen Clamping Down on Farmers in Struggle against FTA” and an un-cropped version with the “News.is” logo:

And finally, here’s an final image that was posted on January 11. The photo didn’t need to be so tightly cropped because the original didn’t have a watermark. It came from a South Korean blog: