In the northern Pyongyang suburb of Hyongjesan there are twelve large satellite dishes on a hillside. The dishes, easily visible in satellite photos, have been there for at least a decade and while their function is unknown, their close proximity to North Korea’s signals intelligence headquarters might be a clue to their purpose.

Some of the dishes have buildings next to them while others are surrounded by trees. Their exact size is difficult to determine, but most appear to be around 16- or 18-meters in diameter. That makes them large enough to receive signals from many satellites in orbit above Asia, but what are they being used for?

TV and telecommunications is thought to flow through the Pyongyang Earth Station, which is located in Sadong in the south of Pyongyang. It maintains North Korea’s links with the Intelsat and Intersputnik satellite systems. In the last few years there has also been significant expansion of the facilities at Pyongyang TV Tower, which went from just a handful of dishes in 2005 to currently more than 20.

Hyongjesan are the third large concentration of satellite dishes in Pyongyang. 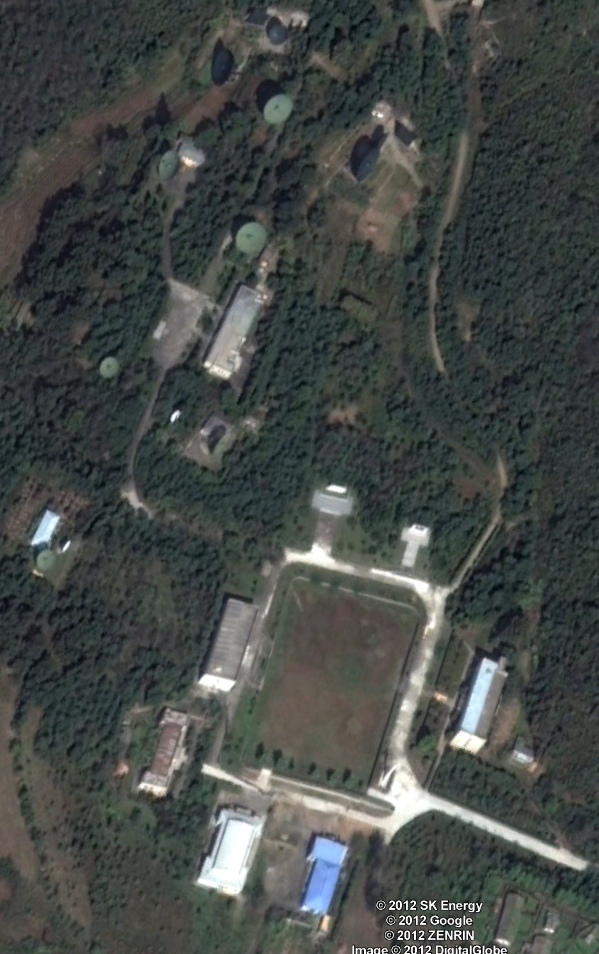 The roads around the dishes lead down the hill to a large square surrounded by a handful of buildings. Of the two buildings on the bottom side of the square, the left hand one (the one without the blue roof) was rebuilt around 2004.

Two monuments are located on the northern edge of the square and a third monument sits in the south east corner of the square. It’s placed to be at the end of the facility’s driveway, about 160 meters from a checkpoint.

It could be military in nature, but it’s difficult to tell.

About a kilometer to the south east lies four large buildings around a tarmac courtyard. Three additional satellite dishes can be seen surrounded by trees to the south of the facility. 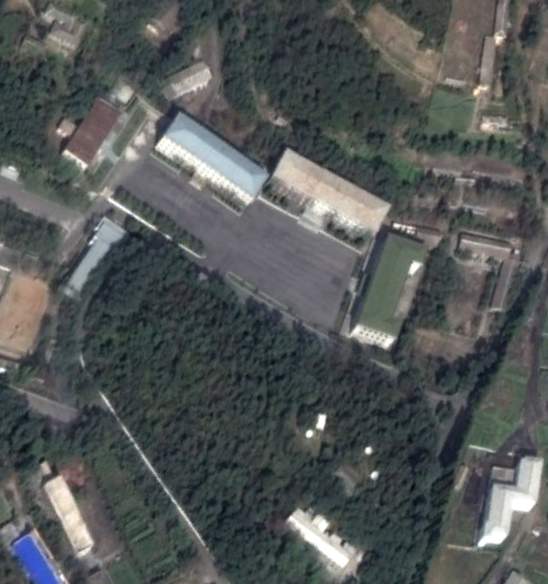 The buildings are believed to be the headquarters of North Korea’s Unit 586, the Reconnaissance General Bureau (RGB). That was apparently confirmed in 2010 when Kim Jong Il visited the complex and photographs were replayed on North Korean television. Curtis Melvin at NKEconWatch wrote about the visit at the time and has a couple of screen grabs, one of which is below. 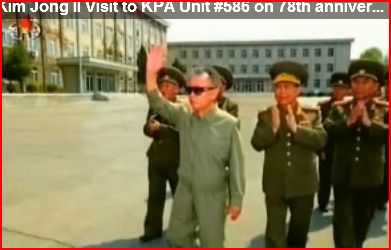 The unit was named in U.S. Executive Order 13382 that set out trade sanctions in August 2010. Here’s what the U.S. government said about it:

The Reconnaissance General Bureau is North Korea’s premiere intelligence organization, created in early 2009 by the merger of existing intelligence organizations from the Korean Workers’ Party, the Operations Department and Office 35, and the Reconnaissance Bureau of the Korean People’s Army. RGB trades in conventional arms and controls the North Korean conventional arms firm Green Pine Associated Corporation (Green Pine), which was also identified for sanctions by the President today for exporting arms or related materiel from North Korea.

The unit was reorganized in 2009/10 and 38 North published an extensive analysis:

Recent changes during 2009-2010—the most dramatic reorganization in years— seem to have been implemented to unify all the intelligence and internal security services directly under the National Defense Commission (NDC) and to secure the position of Kim Chong-il’s son, Kim Chong-un, as his successor. — 38 North Special Report

The RGB has a headquarters and six bureaux, according to 38 North:

The sixth bureau, the technical department, was created from the Technical/Radio Department of the KPA’s old Reconnaissance Bureau. It’s a possible candidate for operator of the nearby dishes.

Here’s what 38 North says about the Sixth Bureau:

The number and organization of the SIGINT assets within the Ministry of People’s Armed Forces is unclear. Ground based assets are believed to consist of a small number of independent collection sites located throughout the North in areas of high interest (e.g., along the DMZ as well as the Russian and Chinese borders); the electronic warfare/SIGINT battalions within Korean People’s Army corps; and the EW/SIGINT battalions that exist within some KPA divisions.

In addition to these assets the Sixth Bureau exercises some degree of control over the Air Force’s SIGINT collection aircraft and Navy’s intelligence gathering vessels. The Bureau also coordinates operations with the Ministry of People’s Armed Forces Communications Bureau and its subordinate units.

So, just a coincidence or something more? Of course, it’s impossible to tell the real use of the dishes from satellite images and news reports, but in a country like North Korea the use is likely military and intelligence.

That’s because civilian communications with the outside world is so limited. There’s a handful of international telephone lines and data links, no cable television and only a fraction of the daily output of North Korean TV (limited usually to a few shorts clips a couple of days a week in the news) that comes in via satellite. There just isn’t the need for so many civilian dishes.

If anyone has any more information, please post it in the comments.