We’ve got more details on North Korea’s plans to launch a rocket later in December, including the daily launch window and where parts of the rocket might drop to sea. [Updated: See below]

The details were included in a notification sent from the DPRK’s embassy in London to the International Maritime Organization (IMO), which is based in the same city.

The notification, a copy of which was obtained by NorthKoreaTech.org, says the rocket will launch sometime between 7am and noon local time (2200 to 0300 GMT) during the possible launch period, which is from December 10th to 22nd.

North Korea’s previous rocket launch, which ended in failure in April, was also scheduled to launch during the same daily window. It eventually blasted off at 7:39am local time, according to reports.

Just as last time, the letter has been sent in the name of Ko Nung Du, who is identified as director general of the DPRK’s Maritime Administration.

It’s almost identical word-for-word with that sent earlier this year.

As before, it notifies of areas where it believes the rocket’s first and second stages will fall into the ocean should the launch is successful.

An addition this time is an area where the satellite fairing, the protective cover that surrounds the satellite during the first stage of launch, is expected to fall back to sea.

Comparing the areas notified last time and this time, changes can be seen.

Here’s a couple of close-ups of the first- and second-stage drop zones. The April launch zones are in orange and the December zones in yellow. (click on the images to make them larger) 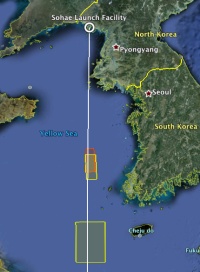 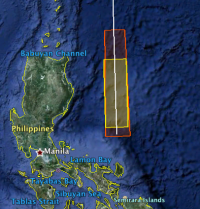 Here’s a copy of the letter from the DPRK embassy in the U.K. to the IMO. 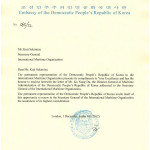 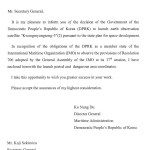 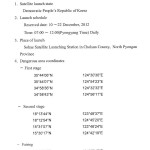 I’ve just received the text of the notice the DPRK has issued to pilots. The “notice to airmen,” usually abbreviated to NOTAM, contains the same information as the communique to the IMO.