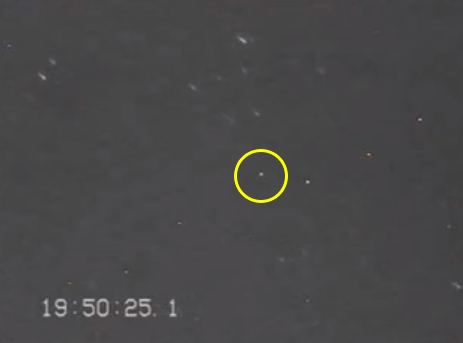 North Korea’s Kwangmyongsong-3 satellite, launched on December 12 but apparently silent ever since, has been captured on video by a South African satellite watcher. [UPDATED: See below]

Greg Roberts posted several video clips on YouTube that show reflections of light from the sides the satellite as it orbits the Earth.

The clips are from December 20th and clearly show the flashes of light. The camera was set on a mount to track the satellite’s path, so the stars in the sky move past in the background. As noted in the videos, the camera has some dead pixels that appear continuously white. Ignore those and watch the center of the picture to see the flashes.

As Roberts explains, the satellite is appearing to flash roughly every eight seconds. We know is taking about 17 seconds to rotate, so the eight second intervals correspond to reflections off every second surface as it tumbles. Roberts also posted video of the final stage of the Unha-3 launcher rocket, which is orbiting the Earth along with the satellite.

The video appears to show some strange movement by the launch but, as Roberts explains:


As for the actual satellite itself, there are still no signs of radio life from the craft. (See my previous post noting some of the difficulties in detecting radio signals.)

While there are challenges to hearing Kwangmyongsong-3, the satellite has now made numerous passes over multiple satellite tracking stations — both professional and amateur run — and nothing has been reported. With each pass and each day that goes by, it begins to look increasingly likely that the satellite is either not functioning.

UPDATE: I just came across some analysis of these videos by Marco Langbroek in The Netherlands.

On his SatTrackCam Lieden blog, he includes some image analysis of the video that produces a slightly more accurate flash rate of 8.45 seconds. Take a look.