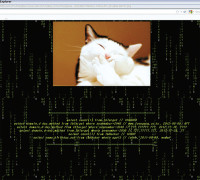 Cyber attacks on South Korean networks suspected to have originated in North Korea are back in the news.

On Thursday, Yonhap News reported that a computer server handling the Internet connection for the press rooms at South Korea’s presidential transition team had been hacked.

The hack, which was not detailed, was detected during a security check by “intelligence authorities,” said Yonhap. Other computers in the transition office had not been hacked, the report said quoting an unnamed official.

The news comes a day after the National Police Agency blamed North Korea for a 2012 attack on the Joong Ang Ilbo newspaper. The NPA said it came to its conclusion because the hacking method and IP address used in the attack were similar to those used by the DPRK in the past. Precise details were not disclosed.

The Joong Ang Ilbo attack was launched on June 9th at 6:13pm and disrupted the newspaper’s production system and its web site, which saw its home page replaced with a picture of a cat. Reporting on the hack of its own systems, the newspaper said at the time it had been forced to switch to a temporary web server to run its home page.

In the last few years, South Korean authorities have blamed North Korea for most high-profile hacks on computer systems in the country.