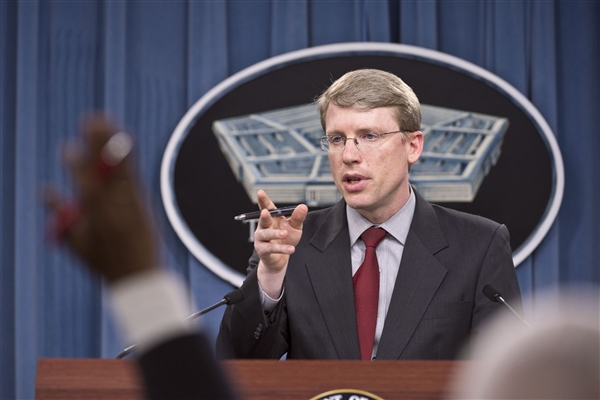 David F. Helvey, deputy assistant secretary of defense for East Asia, briefs reporters about the military and security developments involving China during a news conference at the Pentagon, May 6, 2013. (Photo: Aaron Hostutler/DOD)

The Chinese military isn’t providing any special help to the Korea People’s Army (KPA) on a regular basis, according to the U.S. Department of Defense’s deputy assistant secretary of defense for East Asia.

David Helvey was speaking to the press in Washington on Monday afternoon after the department published its annual report on military and security developments involving China. North Korea comes up just twice in the unclassified version of the report, and both times they are as passing references.

At the news conference, Helvey was asked if there is any evidence that China is sharing any of its advanced war fighting capabilities with partners and allies “such as North Korea” during joint training exercises.

Despite a number of joint training exercises, China doesn’t often roll out its most advanced capabilities.

“To date, a lot of those training and exercise activities focus on, I would say, more conventional and less advanced military areas, like search-and-rescue or counter-piracy or counterterrorism,” said Helvey. “It’s very rare that we’ve seen China use advanced military equipment in these exercises.”

Asked about the situation on the Korean peninsula, Helvey said, “We continue monitoring the situation on the Korean peninsula very carefully, and we maintain very close consultation and communication with our Republic of Korea allies, our other allies and partners in the region, and diplomatically, as well, with China, and Russia.  It’s a very serious situation, and we’ll continue to monitor it very, very carefully.”

The China report was published a week after the Department of Defense produced its annual report on North Korea.

Here’s the relevant part of the news conference:

DOD on acts of war in cyberspace