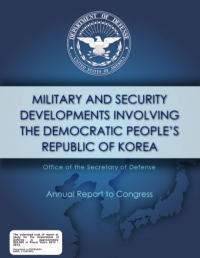 North Korea’s military could turn to cyber-based attacks and weapons as a more cost-effective alternative to conventional weapons, the U.S. Department of Defense says in a new report.

But the annual report to Congress on “Military and Security Developments Involving the DPRK” is also a lot more cautious in blaming North Korea for a series of recent cyber attacks that have targeted South Korea.

Unlike the statements and reports that comes from the South Korean government, the North’s capability to launch attacks isn’t even stated as a certainty by the DoD.

“North Korea probably has a military offensive cyber operations (OCO) capability,” it says in the report that was published this week.

It goes on to note that the country “was allegedly responsible” for denial of service attacks against South Korean private and governmental establishments and was “allegedly behind” attacks in 2013 that targeted banks, TV broadcasters and the government.

The North’s involvement in many of these attacks has been stated as fact by the South Korean government, but the very nature of cyber attacks makes it difficult to conclude with certainty the organization responsible. That uncertainty appears to be at the root of the DoD’s cautious stance.

“Given North Korea’s bleak economic outlook, OCO may be seen as a cost-effective way to develop asymmetric, deniable military options,” the report said.

“Because of North Korea’s historical isolation from outside communications and influence, it is also likely to use Internet infrastructure from third-party nations. This increases the risk of destabilizing actions and escalation on and beyond the Korean Peninsula.”

North Korea’s cyber operations are thought to be carried out by the Reconnaissance General Bureau, one of four intelligence agencies in the country.

The bureau runs clandestine operations including infiltration of South Korea and Japan and was named in U.S. Executive Order 13382 that set out trade sanctions against the DPRK.

Its headquarters were located after TV footage was broadcast of a visit there by Kim Jong Il in early 2010.