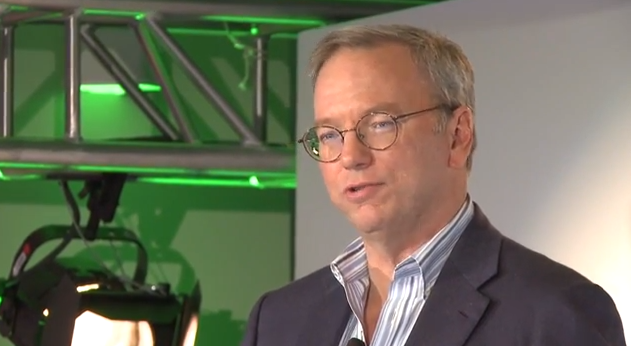 The Google-organized events act as idea summits and have been running for about three years and the D.C. event took place on April 26.

During his speech, the chairman of Google talked about North Korea and the impact that the connected world, and the Internet in particular, would have on authoritarian countries.

“In North Korea we visited with the government, of course that’s all there is in North Korea, and we went to the Korea Computer Center and they asked us all about future versions of Android,” he said in the speech. “Obviously they have access, at least in the government, to what we are doing, as if I was going to tell the future roadmap of Android to the North Koreans. I obviously didn’t.” 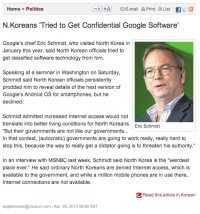 A screenshot from the Chosun Ilbo website on April 29, 2103.

I’ve been waiting for the video to verify exactly what he said after a report in the Chosun Ilbo made it seem like the North Koreans were asking Schmidt for top-secret software code. (see image, right)

In fact, rather than trying “to get classified software technology” as the Chosun Ilbo painted, it appears the computer scientists just wanted to know what features would be available in future versions of Android. Pretty much everyone in the mobile industry has the same question — something Google could reveal that later this week at its I/O conference in San Francisco.

Getting Android doesn’t even need Google’s permission. The basic version of Android is open-source software that can be freely downloaded from the Internet. An export license may officially be required, but that doesn’t appear to have been a hurdle so far.

That basic version doesn’t include the Google services, like Gmail, Maps or YouTube. For those apps a licensing agreement is required with Google.

Beyond the North Korea-specific comments, the whole thing is worth watching if you’re interested in what’s driving Schmidt these days. Listen and it will become clear that his January trip to Pyongyang wasn’t at all about opening up North Korea to Google, but about opening up a dialogue with the country about it’s coming transition to a more connected place. That’s something he sees as inevitable.

“We’re going to see this one-way valve from the connected world to the non-connected world, and this is going to happen whether we like it or not,” he said.

More connectivity will not only transform the lives of North Koreans, but has the chance to fundamentally change the way the rest of the world looks at North Korea. Right now, too much of the world views North Korea by its government’s actions and sees the people as nothing more than a brain-washed populous. Schmidt argues that will change.

“All of a sudden we’re going to hear the distinct voices of citizens in those countries in a way we’ve never heard before, and by the way, they’re just like us. They’re human beings, they’re curious, they want the right things for their children, they want good health, they don’t want war, all those kinds of things,” he said.

But he acknowledges that authoritarian governments are going to push against further expansion of communications technology.

“Governments are going to work really, really hard to stop this because they way to really get a dictator going is to threaten their authority, which is the way revolutions occur,” he said.

There was a final shout-out to North Korea, when Schmidt said he viewed the country as the second worst for connectivity and flow of information in the world.

“What’s interesting is that I had always thought the worst place was North Korea, and I’ve since discovered there is an even worse place, which is Eritrea, which I have not yet been able to go to but is my objective,” Schmidt said.

Eritrea usually sits with North Korea at the bottom of the Reporters Without Borders and Freedom House press freedom rankings.

Reporters Without Borders recently characterized Eritrea as, “a vast open prison for its people.”