Kim Jong Un visited on Saturday the Pyongyang factory where North Korean cell phones are supposedly made, according to the state-run Korean Central News Agency.

The Android-based AS1201 “Arirang” cell phone, reportedly produced by the May 11 Factory in Pyongyang.

Photos of the visit, released by KCNA, show Kim touring the May 11 Factory and talking to officials. There’s also a picture of what’s said to be the latest cell phone on the North Korean market, an Android phone called “Arirang.” (See right, click for larger image.)

The visit came two years and two weeks since Kim Jong Un last visited the factory. That time he accompanied his father, Kim Jong Il, on a tour of a flat-screen LCD TV assembly line. At the time I noted the production line shown in TV coverage of the visit didn’t look much like those in a typical electronics factory and the same is true this time around.

Workers are shown with finished products, inspecting them and testing them but no actual manufacturing is shown.

Despite KCNA’s reporting that the handsets are made at the factory, they are probably made to order by a Chinese manufacturer and shipped to the May 11 Factory where they are inspected before going on sale.

That will be all but confirmed if the handset shown in the photo can be identified.

Here’s what KCNA said about the visit:

He learned in detail about the performance, quality and packing of “Arirang” hand phone being made at this factory.

He highly appreciated the creative ingenuity and patriotic enthusiasm with which the officials and employees of the factory laid a solid foundation for mass-producing hand phones by building a new modern hand phone production process.

He praised them for developing an application program in Korean style which provides the best convenience to the users while strictly guaranteeing security.

After learning about the performance of a touch hand phone, he said that a hand phone is convenient for its user when that part of the phone is sensitive.

He noted that these hand phones will be very convenient for their users as their camera function has high pixels.

After being told that “Arirang” hand phones which the factory started producing a few days ago are high in demand among people, he said he was also pleased as they are liked by people.

Looking at the trademark “Arirang” inscribed on the hand phone, he noted that mass-production of goods with DPRK trademark can instill national pride and self-respect into the Korean people.

How nice to see hand phones being successfully produced with indigenous technology, he said, adding it is of educational significance in making people love Korean things.

He said that only when the quality of products is improved while boosting their production, people will like home-made things and they will be in high demand. — KCNA, August 11, 2013.

A report on the visit was carried by Korean Central Television, but it didn’t show any video or still images from the trip.

Analysis of the meeting by Daily NK noted the visit is the first time that Kim has “offered the Kim family stamp of approval to the widespread production, and by extension ownership, of cell phones.”

That’s true, although Kim Jong Il’s previous meetings with Naguib Sawiris, chairman of network operator Orascom Telecom, received widespread coverage in state media as did the switching on of the cell phone network.

Daily NK also said it was noteworthy that “Kim posited the idea of cellphone production as a patriotic activity.” 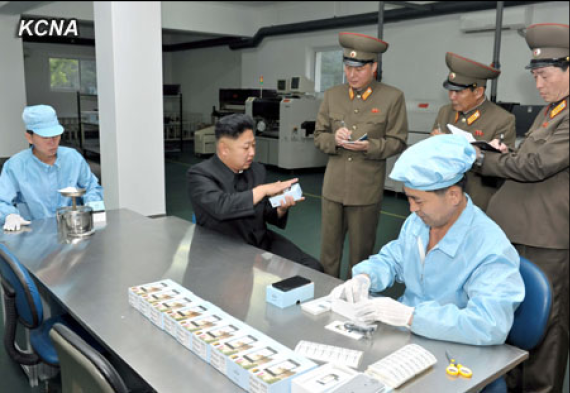 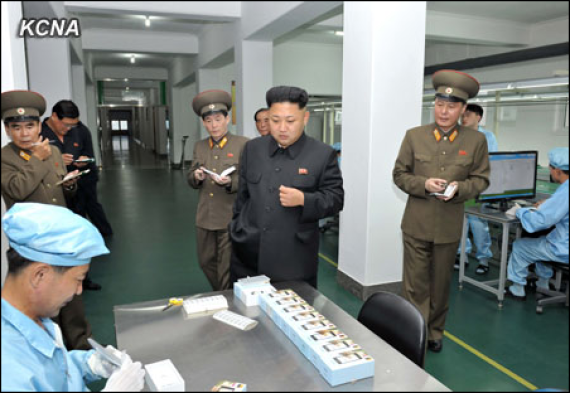